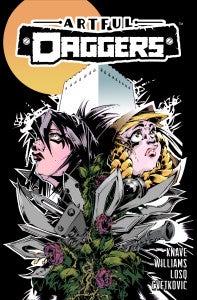 Created by Sean E. Williams, Adam P. Knave and Andrew Losq, with lettering by Frank Cvetkovic, Artful Daggers is a story of greed, betrayal, and ultimately, corruption. Fifty years after a time-traveler brings science and technology to the medieval ages, corporations have replaced kingdoms, and the future teeters on a bleak precipice. Agents and assassins, hired for their specialties by the rivaling companies, stem the flow of information with the flow of blood. But the current system can't hold, and the balance of power is shifting...

"We all had a blast making this first Artful Daggers arc, a spin-off of Mark Twain's A Connecticut Yankee in King Arthur's Court, and have been blown away by the enthusiasm of digital readers,” Williams said. “Partnering with IDW for the print collected means a whole new set of readers can discover Andrew's astounding art and explore this alternate universe for the first time, with the lush attention to detail that IDW brings to its books."

"To use Amelia Cole as a perfect example, you try to pitch Amelia Cole and you get kind of lost in this–'Well there’s magic but it’s like an old pulp serial but it’s also a female lead who always keeps her clothes on,'" Knave said. "And all of these things are important, but trying to sum that up very quickly can be hard. Artful Daggers has a built-in cultural shorthand. 'This takes place fifty years after Connecticut Yankee.' And it’s fifty years so that we could start to get away from being a direct sequel and see how it affects the world but not so far that it’s completely myth. It’s just starting to become myth."