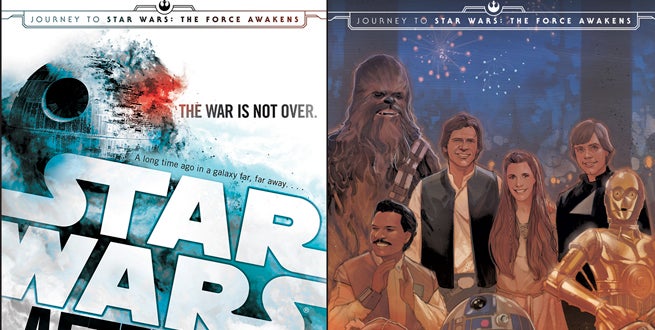 It has certainly been a fun couple of weeks for Star Wars fans. A month out from Star Wars Celebration Anaheim, the news about the franchise just doesn't seem to stop coming. In the last month alone, we've had:

This week, the first two Journey to Force Awakens covers were released as well, one for comics and one for novels. The first Marvel Comics release is called Shattered Empire, and hits stores September 2015. The "Event Series" looks like it takes place just moments after Return of the Jedi, if the art released by Phil Noto is any indication. Three Ewoks and Lando join the core of Luke, Leia, Han, Chewbacca, R2D2 and C-3PO on the poster, and they're all smiles. No creative team was announced just yet.

Star Wars: Aftermath is the first novel in the 20-something releases under the Journey banner, coming from Chuck Wendig, also in September. The book, according to senior editor Jen Heddle, is the start of a trilogy offering the "first canon glimpse into the state of the galaxy after the Battle of Endor." After the second Death Star is destroyed, there is still a galaxy full of Imperial military and agents. There's not a lot of explicit information about it, except that there will be a new cast of characters plus "a fan favorite from the films." Start guessing who that might be now.

Also, in the comic book world, Stuart Immonen was announced as the follow-up artist to John Cassaday on the flagship Star Wars comic. He'll begin as the new ongoing artist with July's eighth issue, after an as-yet-unannounced guest artist comes in for #7. 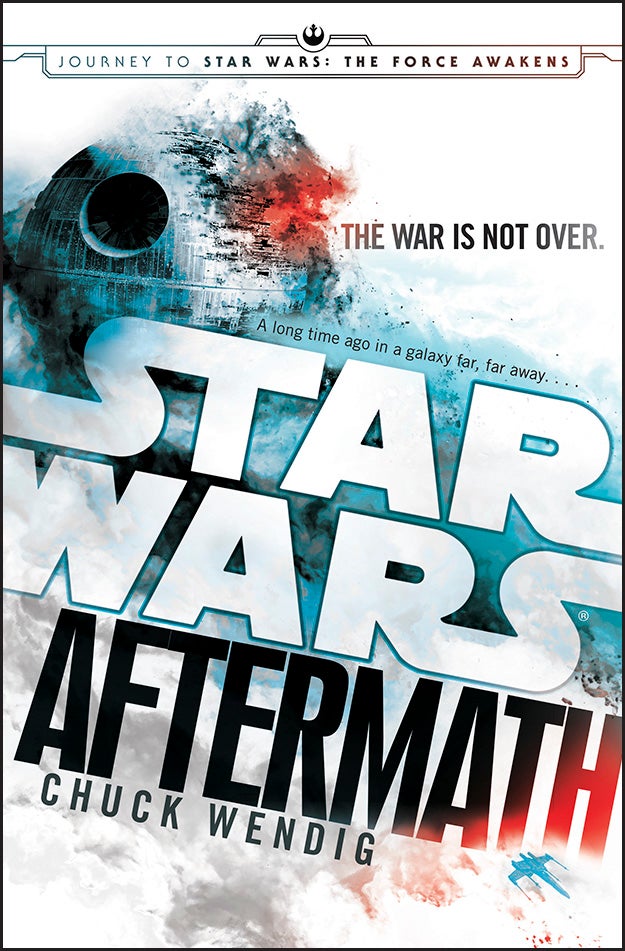 So that's the state of Star Wars right now. As we continue counting down to The Force Awakens in December, today I wanted to take a look ahead even further with the significance or Star Wars: Rogue One. The immediate thought to Star Wars fans is of course a call sign. "Rogue One" could also be called Rogue Leader, the head of Rogue Squadron (hopefully we can get through this without making "Rogue" lose its meaning).

Rogue Squadron had a massive presence in the Legends books and comics, known previously as the Expanded Universe. Multiple feature books, comics, appearances in others, and even video games all centered around the elite fighter pilots. So it's not a giant leap to assume the film, Rogue One, will be as well. The big question then is, when will the story take place, and what kind of story are they looking to tell?

So far, the only announced cast member for the film is British actress Felicity Jones. While the female pilots in Return of the Jedi were cut from the film, the concept has been explored heavily in Legends. The idea of the first spin-off stand-alone film being centered around a female pilot, leading Rogue Squadron, is a fun one for fans of those tales, and would be a significant acknowledgement of the nearly 50% of active Star Wars fans who are, in fact, women. It's safe to say that no matter what, Jones will have a significant, starring role – otherwise, why announce her initially at all? A Rogue Squadron movie also has many possibilities for timelines, though. Any time after its formation following the destruction of the Death Star is possible. It would be hard to insert it into the original trilogy – you'll note, actors are humans who age in real time. There could, however, be a couple of possibilities. One would be for the name "Rogue Squadron" to be a symbolic one, passed around throughout the Rebel Alliance from its earliest years. This would allow you to do a film concurrent with the Star Wars Rebels timeline, and even possibly bring in some of those characters into the live action universe. 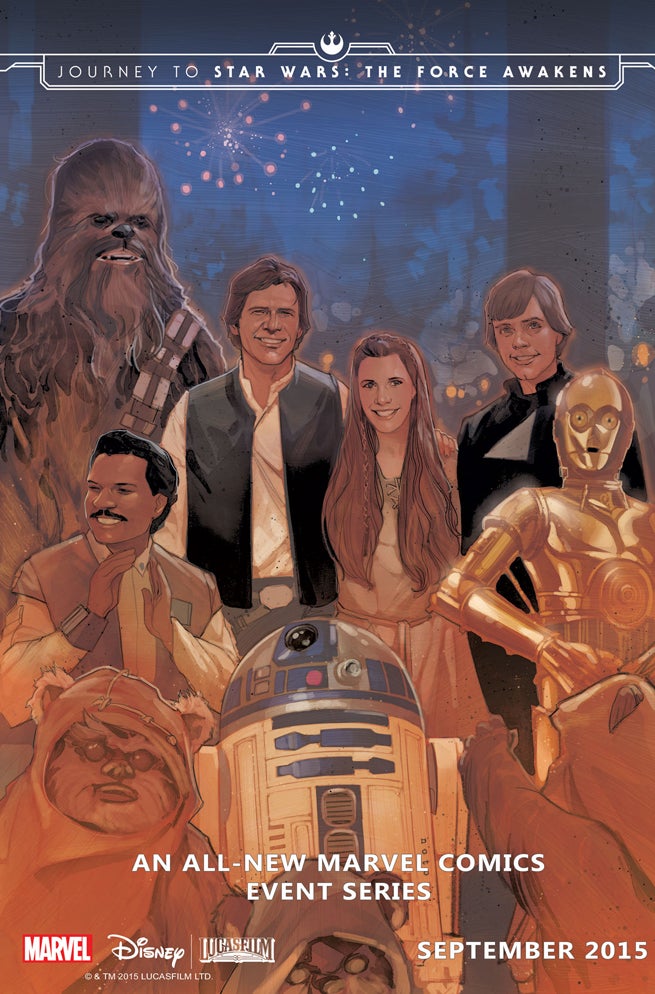 The next possibility is to set things directly after the events of Return of the Jedi. With Luke off on other missions, someone new takes the role of Rogue Leader (or Rogue One), and leads the newest version of the squadron as they try to clean up the Empire's remains. As noted above, that's an area of the timeline that is going to be explored extensively in the all-canon books and comics, which could make for some nice setup for the film.

Of course, there's also thirty years of time to explore leading up to The Force Awakens, and Rogue One could hit any moment there. An intriguing possibility would be to have an older Wedge Antilles training a new Rogue Squadron 20 or 30 years down the line – of course, Denis Lawson turned down a reprisal of the role for The Force Awakens, so that may be hard to do.

Finally, the film could take place concurrently with, or shortly after The Force Awakens. I actually think that's the least likely scenario, as Lucasfilm/Disney has been fairly transparent about wanting these films to truly Stand Alone. Making it a "Episode VII/Episode VIII side story" would take away from that significantly.

I'll end with a wild theoretical possibility as well: What if we're all off base with our initial assumption that this is Rogue Squadron? There is another major significance to "One" as a name in the Star Wars universe: the name of Boba Fett's ship, Slave One. Boba Fett has been largely rumored as a targeted character for a standalone film. The possibility of a female character taking over for Boba after his death has been explored in Legends, too. Maybe, and again, this is just rampant speculation, but maybe Felicity Jones' character takes Slave One and "goes rogue," refusing to answer to Bounty Hunters, Imperial Remnants, or the Rebel Alliance alike. It's wild, it's out there, but it sure could be fun.

Next week: Hashtag fun returns, and a post-Season One chat with Hera Syndulla herself, Vanessa Marshall!