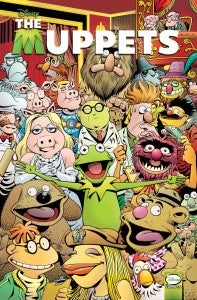 Marvel Comics are using their newfound rights to Walt Disney's catalog of characters by collecting all of Roger Langridge's award-winning Muppets comics from BOOM! Studios in a massive Omnibus edition.

"I'm extremely proud of the work I did on the Muppet Show comic books and thrilled to hear that they'll be available soon in this long-lasting format,” said Langridge. “This is one of those rare cases where corporate imperatives neatly intersected with a cartoonist's own interests and passions, and I'm pleasantly surprised to hear that Marvel thought my efforts were worth commemorating with such a prestigious edition."

Says Marvel, "Explore every corner of the Muppet Universe, from the broiling labs of Bunsen and Beaker to the DEEP reaches of the galaxy with Piiiigs In Spaaace, in a Muppet experience like no other. And of course, no Muppet production would be complete without Kermit and the Glam Ham herself, Miss Piggy! Strap in for a knee-slapping joy ride that celebrates the best of what the Muppets and comics have to offer with The Muppets Omnibus Hardcover!"