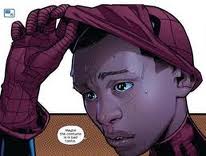 As Peter Parker fell in the recent issue of Ultimate Spider-Man #160, a new hero has decided to take up the mantle and carry on the good fight in his name. Marvel Comics released the information this morning on the newest teen to wear the web shooters. His name is Miles Morales, a half-black, half-Hispanic teenager and his addition to Marvel's Ultimate universe expands the range of diverse characters in that world a little bit more, especially for a recognizable and flagship character such as Spider-Man. Wednesday's release of Ultimate Fallout #4 will see the character introduced to give readers a teaser. His full origin will be explored in Ultimate Spider-Man #1, which relaunches in September.

In discussing the news with USA Today, writer Brian Michael Bendis said that for Morales, some things will remain the same, "The theme is the same: With great power comes great responsibility. He's going to learn that. Then he has to figure out what that means." Marvel sees the move to include more diverse characters such as Morales as keeping with the increasingly diverse and different world in which we live today. Fans of Peter Parker shouldn't feel as if they are missing out. Peter is STILL swinging across the skies in New York in the regular Marvel universe (that's 616 to those in the know !) and fans of the Ultimate Peter Parker can expect to see Aunt May and Gwen Stacy pop up in the new series to give Miles advice as he attempts to fill a void left by Peter's demise.

One of our writers speculated on this new Spider-Man's identity yesterday, and we're excited about this latest addition to the pantheon of heroes in Marvel's expanding roster and universe, Ultimate or not!