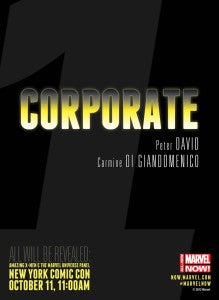 Peter David, fresh off the end of his epic run on X-Factor, will launch a new X-title for Marvel Comics, set to be announced at New York Comic Con, according to a new teaser image fresh from the publisher. David will be joined by artist Carmine Di Gianomenico and so far all we know is that it will be..."Corporate?" Certainly this might be an X-Factor follow-up; Jamie Madrox has done a hero-for-hire style thing in the past, with his detective agency, and X-Factor itself has been both a governmental and private organization. The final storyline in David's X-Factor run teased a possible new incarnation of the team. Details are coming up at the Amazing X-Men panel at New York Comic Con on October 11.