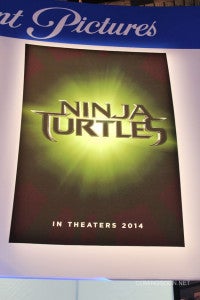 The news comes by way of Comic Book Movie, who had been following set photos closely and so presumably had come to know some of the extras.

They also claim that The Shredder's stepdaughter and second-in-command, Karai, will play a role in the film and that the global promotion machine is already being assembled for the film, with Megan Fox planned as the international face of the movie. Brazil and other markets are already expecting a visit from the star.

Fox plays April O'Neill, the Turtles' close friend and confidant, and is therefore likely the most visible "human" face in the film, since many of the characters including the titular Turtles will be CG-enhanced motion-capture characters.