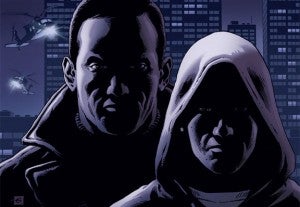 As originally reported, it appears that directing an upcoming film adaptation of Mark Millar and Dave Gibbons's Secret Service, and not a Star Wars sequel, is what drew Matthew Vaughn away from the upcoming X-Men: Days of Future Past film.

While the plan had been for Vaughn to work on Secret Service once Days of Future Past was completed, Mark Millar (who in addition to having written the Secret Service comic, also recently took a position at Fox that would presumably allow him to approve the change) told Comic Book Resources that sources beyond his control led to a need to expedite Secret Service.

"We thought Matthew was going to do X-Men first, but we found out there were actually a few imitators of Secret Service in the works," Millar told CBR. "People are always trying to rip you off. Somebody will start to work on a spec screenplay about your idea. There are three other projects I know of now about a James Bond kind of guy taking a street kid and turning him into a spy. Three screenplays were already going through Hollywood about this! So Matthew and I said, “F--- this. We’re not letting anyone steal our ideas.”

Not Star Wars--Secret Service Lured Vaughn Away From X-Men