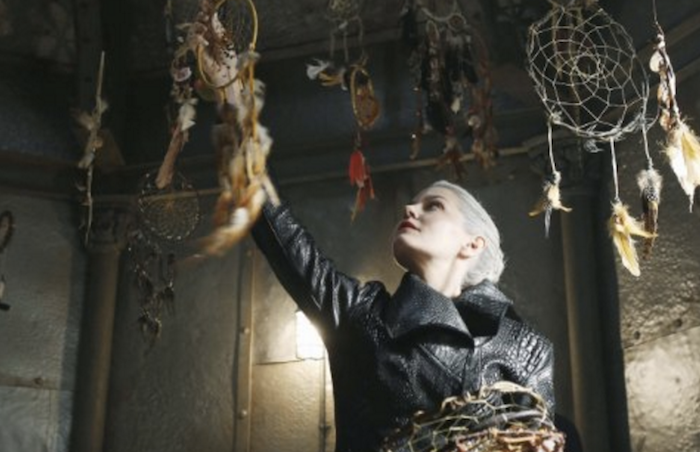 “Broken Heart” begins just as after Hook (Colin O'Donoghue) discovers that Emma (Jennifer Morrison) made him into the new Dark One, while Zelena (Rebecca Mader) gleefully watches their conversation. Hook admits that he feels reborn – embracing his re-discovered darkness – and wipes Emma’s memory with the dream catcher, and then Zelena puts her magic-restraining cuff on Emma too.

Back in the Camelot flashback, we see Hook rise as the Dark One in the alternate dimension where we found Emma earlier this season. Rumple (Robert Carlyle) is there, as the voice in the Dark One’s head, and he offers to help Hook get revenge, on the actual Rumplestiltskin. Hook is reluctant to work with him, and soon, Emma appears in the dimension as well as another one of the Dark Ones. She convinces him that they can work together by bonding together in love, which pushes out the darkness.

Hook feels the pull of Excalibur for the first time that night, despite the fact that Emma claims it is gone. She admits to having it, and he is furious about her dishonesty and the lack of faith that she has in him. Emma is forced to summon him with the dagger later, just to have a conversation, angering him even more. She gives him Excalibur so that he can be it control, and they make up.

In present day Storybrooke – Snow (Ginnifer Goodwin), Charming (Josh Dallas), and Regina (Lana Parrilla) finally burst into Emma’s home, they find her alone and without magic. She tells them about Hook, and they reason that they can simply use the dream catchers to see what Hook’s pans are. Unfortunately, all of Emma’s dream catchers are gone.

Then, Hook challenges Rumple to a duel on his ship and even gives Excalibur to him for a fair fight. When Rumple and Belle (Emilie de Ravin) meet with the others, they debate whether to take the magic cuff off Emma, since she is still a Dark One. Even Henry is against the idea. In fact, they decide to leave Emma behind while they formulate a game plan. 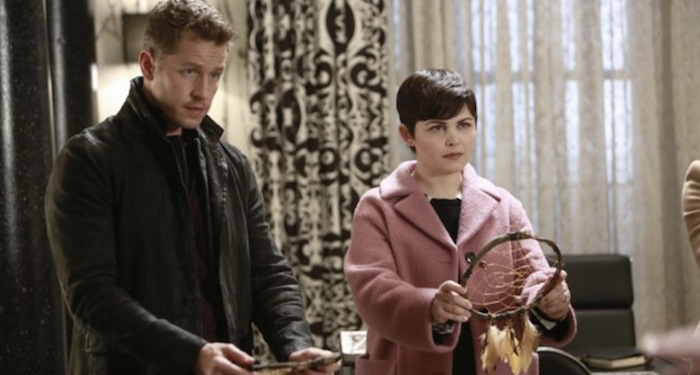 Zelena heads to the hospital to find her child but finds only Regina, who allows Zelena to meet with Robin (Sean Maguire) and the baby back at their home. Robin tells her that – though the three of them will never be a family – he will allow her to visit the child, as long as both he and Regina are present. Zelena then has her first real bonding moment with her new baby.

At Regina’s request, Merida (Amy Manson) is guarding Emma at her home, though Hook appears fairly quickly and immediately tosses Merida aside. He calls Emma “nothing more than a pretty, blonde distraction,” who merely held him back from getting revenge on Rumple all this time. Later, escaped Emma visits Rumple and asks him to be successful in the duel with Hook – at least for as long as it takes for her to steal back the dream catchers.

Next, Emma recruits Henry to help her obtain the dream catchers. He offers to make a locator spell for them, calling the attempt “Operation Cobra: Part II.” Meanwhile, Rumple goes to Hook’s ship to duel, determined. Their swordfight goes back and forth, as Henry and Emma find and locate the dream catchers. Henry also frees Emma from the cuff. Miraculously, Rumple eventually takes control of the fight but decides to let Hook live – forever with the memory of Rumple’s mercy. The tables turn again for Rumple, when he returns to Belle only to receive a break-up speech.

In the continued Camelot flashback, Hook interrupts Merlin (Elliot Knight) in the middle of his recording his previously seen emergency message. To get revenge on Rumple, Hook will need to get back to Storybrooke, but to enact a spell that will allow the re-location, someone will have to crush the heart of “the thing they love most.” So – Hook steals Merlin’s heart, and Nimue appears. When Hook crushes the heart, it will be as if Nimue did it herself, since she is “in all Dark Ones.” Emma appears, devastated to find that Hook has tricked her. Hook, unfazed, crushes Merlin’s heart in his hand.

It is at this point in the Camelot flashback when Emma steals all of Hook’s memories, saying, “when you wake up, you will be the man you were.” She summons all of the others, erasing their memories as well and leaving their unconscious bodies on the floor at Granny’s, where the season began.

Lastly, in the present, Emma and Henry distribute the dream catchers to everyone, restoring all of their memories. Suddenly, Emma has a realization. Hook intentionally lost the duel to Rumple, so that he could get a drop of Rumple’s blood, an important ingredient for a spell that opens a portal into the Underworld. Hook opens the portal, summoning all of the past Dark Ones, in the flesh, to aid him in snuffing out the light.

Once Upon a Time Season 5 Episode 10 Recap With Spoilers: Broken Heart