When the first full-length trailer for Warner Bros.' upcoming Superman reboot Man of Steel hit the Internet a while back, one of the images that most fans commented upon was that of Henry Cavill's Clark Kent moving through what appeared to be the hull of a ship with its boiler on fire. The image was notable not only because Cavill was bearing enough skin to make the image a perfect dorm-room poster for college girls, but because while doing it, he was on fire. The image of Superman with his body on fire and just kind of walking through it really resonated with fans, especially those who had complained that 2005's Superman Returns hadn't really offered the Man of Steel much in the way of a serious physical challenge and that there was little in the way of evidence that Superman was really all that "super" in the movie. It became an instant fan favorite and was one of the most frequently referred-to images in the trailer. 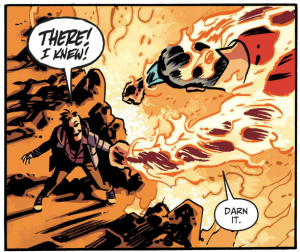 Fast forward just a little while--and here we've got it again! This time in the first issue of the digital-first anthology title The Adventures of Superman, the first issue of which debuts today and features a story from Jeff Parker and Chris Samnee, with a cover by Bryan Hitch. And apparently, either independent of the film or because they had seen how cool it looked, the pair decided to give it a try, comic book-style. At one point in the story, Superman needs to cloak himself in the hopes of not being seen by the villain. How does that play out? Well, you can see at right... This issue was originally set to feature a story from controversial and best-selling science-fiction writer Orson Scott Card, but after a protest over the company's decision to hire him began to draw attention away from the work, artist Christos Gage backed out of the job. DC has said that Card's story will be reprinted at a later date with a different artist.