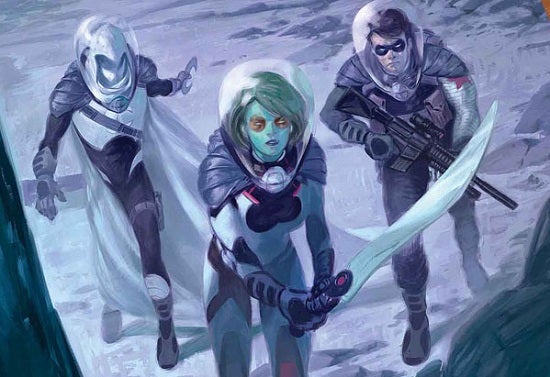 There are some mild spoilers ahead for Original Sin #3, but all of the major story beats are protected. Unless you are bothered by "this character reacts in a cool and perfectly in-character way to this challenge," you should be safe to read on.

Marvel's Original Sin event enters its second act with today's Original Sin #3, as the first repercussions of The Watcher's secrets begin to impact the characters of the Marvel Universe and a tone is established for the rest of the series.

There are some very bright, bright spots in the issue which seems perfectly positioned to take advantage of the dominance of Marvel's Agents of S.H.I.E.L.D. and Captain America: The Winter Soldier in other media, while giving winks and nods to Guardians of the Galaxy with a sci-fi high concept that's rooted firmly in the cosmic part of the Marvel Universe. 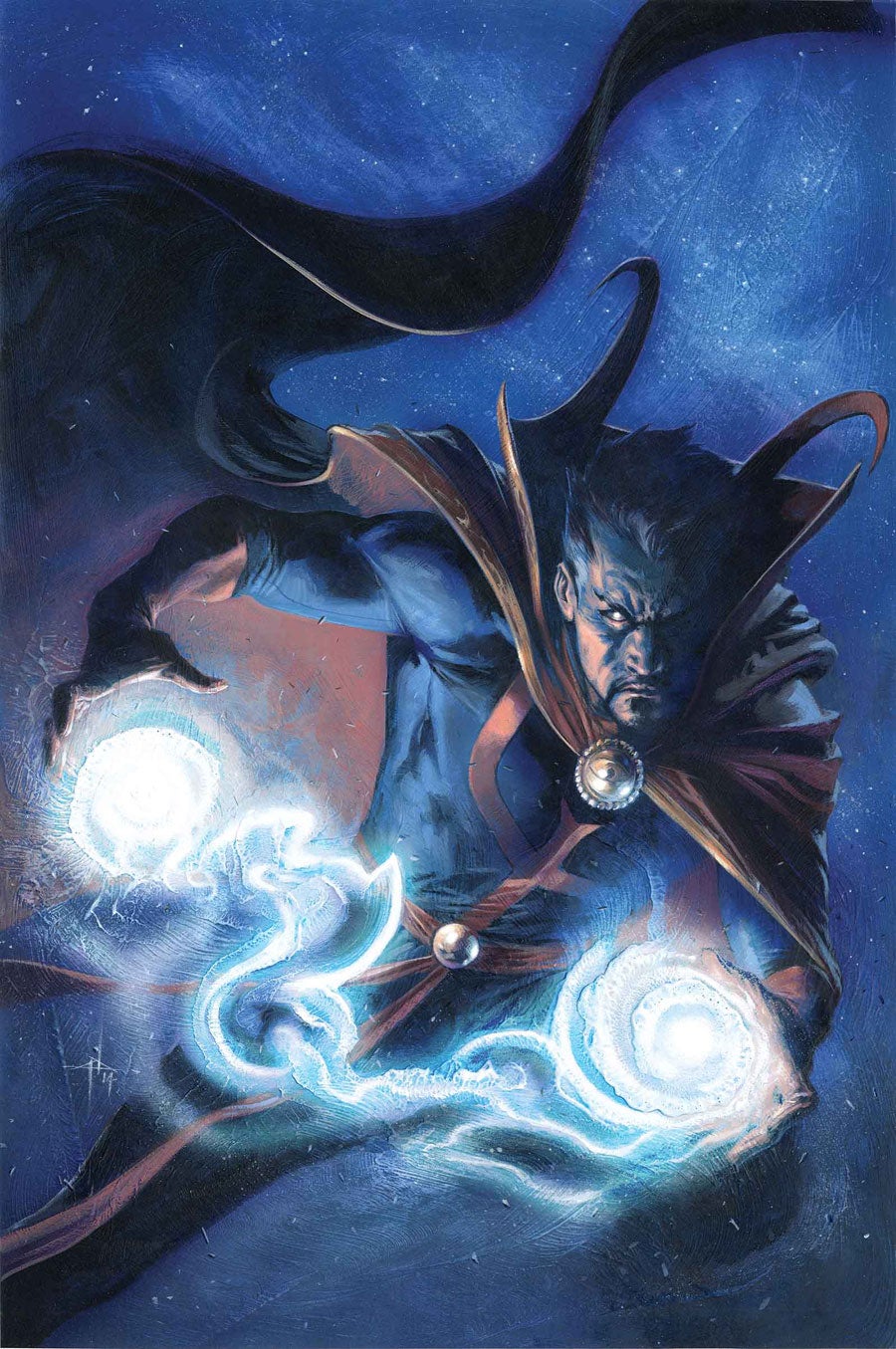 That doesn't stop the issue from feeling a bit derivative in some ways, though; the "small teams of superheroes playing Scooby-Doo" approach to the murder mystery that drives most of the plot feels like it was borrowed from Brad Meltzer and Rags Morales's Identity Crisis, for instance, and the Big Twist that most of the Internet is already spoiling this morning is unexpected -- but it seemingly closes more storytelling doors than it opens, which seems like it should be avoided in serialized fiction.

(And if that isn't the case, then the "solution" to that problem seems so obvious that the entire event can already be mapped out from here.)

On the whole, though, there's a whole lot more to like than not about Original Sin #3. Mike Deodato's art is more suited to this story than possibly any I can recall in his long career. The more uncomfortable cheesecake elements of his style are played way down, in favor of a look that feels almost Vertigo- or Image-infused. It suits the needs of the murder mystery story well, but Deodato can't divorce himself entirely from his superhero roots, which means that while you can often see "real-world" artists whose superheroes suffer because the costumes look silly in the context of that more cinematic flavor, here it meshes really well and makes the Marvel Universe feel real in a way few books do.

In fact, Aaron contributes a bit to that as well. A single panel -- a random aside, really -- showed that the eye of the Watcher has been revealing secrets not only to the superheroes (which we knew from promotional materials) but to ordinary people as well. While "Frontline"-style tie-ins that showed up Marvel events impacted the world around our heroes never had much appeal to me in the past, the intriguing little teases of how this particular event could unravel the worlds of ordinary people felt like it was calling out for a one-shot. Weirdly, that panel and the way it made the world come alive was a highlight of the issue. 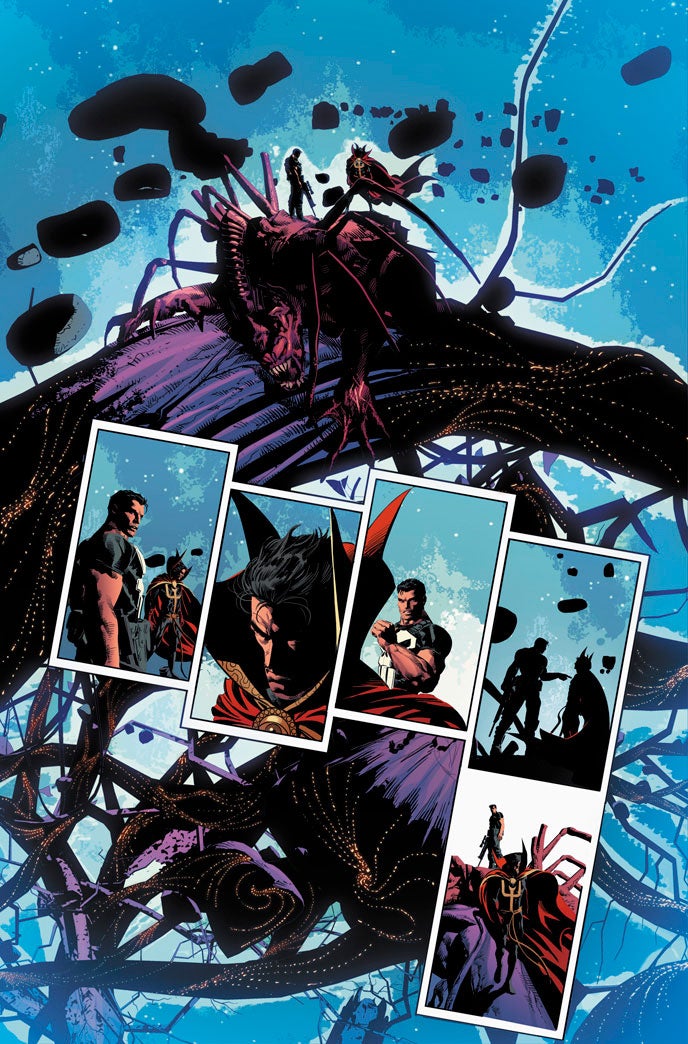 Arguably nobody does more to nudge along the tone of the issue than colorist Frank Martin, though; he's selected just the right palette for this story, and it ends up feeling like something we might see in the Marvel Cinematic Universe; Deodato presents the costumed characters in a setting that feels fairly realistic, and the colors sell the whole thing by playing down the garish costumed colors on some characters (Wolverine, for instance, and even The Hulk to an extent) and playing them up where needed (Captain America, obviously).

All of this helps to build a feeling that ordinary people are making a huge difference in this issue. Again, you can look no further than Captain America: The Winter Soldier to see why that's appealing in the Marvel Universe. In that film, the world of gods and monsters was rocked by moles in a spy organization. Here, we have Sorcerer Supreme Stephen Strange deferring to The Punisher because...well, when you're doing forensic investigation, a guy who knows everything there is to know about guns is way more valuable than a guy whose magic hammer calls down lightning. Bucky Barnes similarly steps up to take charge of his little group, in spite of the fact that they're in space and Gamora would seem a more logical candidate in many ways...and of course Nick Fury Sr. has been behind the scenes helping to marshal the heroes' forces from the start. I love what Aaron did with Captain Americain this issue enough that I'd be interested in seeing him get an arc with the character once Remender is out of there, too.

It's Fury whose arc is arguably the most interesting, and promises to most impact the book. Of those who came into contact with the "explosion of secrets" from The Watcher's eye, it's only he and Captain America who seem unimpacted by it -- and for Cap, it's not a matter of immunity but of a steely will that won't allow him to be distracted. In an issue full of big reveals and promising many more in the coming issues and tie-ins, it's the lack of any skeletons tumbling out of the morally-gray Fury's close that's arguably most interesting...and it seems clear from the end of the issue that his story will play out throughout the rest of the series, once again grounding a cosmic story in as human a character as Marvel has on-hand.

The bottom line: Aaron turns in a capable script with some terrific character moments in what's ultimately one of the hardest things to pull off well: the middle chapters of one of these universe-spanning event books. It's been years since I've been as impressed with Deodato's work as in this issue, and they picked the perfect colorist for the project in Frank Martin. The issue retreads a lot of familiar ground and plays with some overused tropes, but it's beautifully executed on a lot of levels. So far, Original Sin is the best Marvel event in years. 8.5/10

Original Sin #3 Review: Beautifully Executed On A Lot of Levels