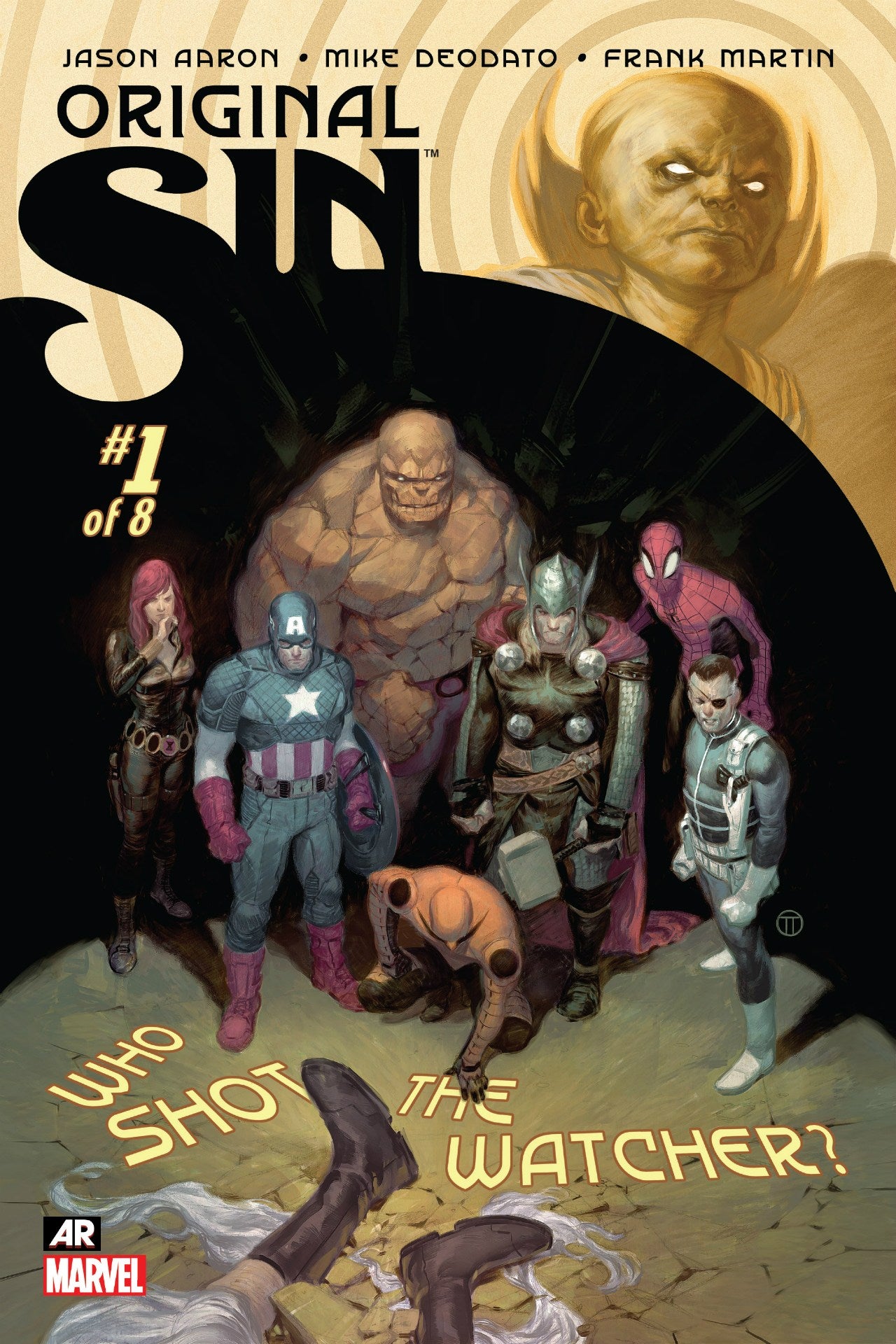 For better or worse, event comics have become an accepted and perennial device in the mainstream comic industry.

While in the current climate it takes a severe suspension of disbelief to engage with most events from Marvel or DC, stories in which “nothing will ever be the same again,” there is still a fair amount of potential for exciting tales spanning all known sectors of your preferred comic book universe. Unfortunately, that potential is rarely reached. For every Civil War or Crisis on Infinite Earths, a much larger number of events can be charted on a increasingly downward slope of diminishing returns (Siege, Fear Itself, Forever Evil, etc.) if not in sales figures, then certainly in terms of quality. But every once in a while, a story comes along that bucks the trend. A story that’s fresh and exciting, one that feels “real” and fulfills that powerful need for change-without-change ever-present in fans’ minds. Jason Aaron and Mike Deodato’s Original Sin is such a book.

Both the problem and attraction of a comic book event is that the stakes must always be high, events must “matter,” and the status quo must change. Usually, the change is more illusionary than literal, but it’s apparent nonetheless. These requirements, coupled with the monetary needs of the Big Two publishers, often lead to at least one major event every year—although now readers can expect something like an event almost every season. It should surprise no one that this pattern is a recipe for low-quality storytelling.

Crisis on Infinite Earths, the progenitor of all mainstream comic events, had a lasting effect on the DC Universe. Years after the story had run its course, narrative threads were still being plucked and rewoven into continuity by the likes of Geoff Johns and co. Civil War, effective due in part to its transmutation of a zeitgeist into a superhero blockbuster, is probably the last great large-scale storyline to come from either publisher. It can be said that the lasting narrative impact of these comics on their respective universes is an indicator of their success, but it is more likely that their enduring impact is a result of high sales and general critical approval. Really, the key then is to simply make good stories that involve a major threat bringing all fan-favorite members of a particular universe together to solve. Classic relationships are highlighted, new bonds are formed, and the opportunity for action is in supply.

Which is why Original Sin works. Jason Aaron — Marvel’s strongest and most consistent, yet somehow simultaneously underrated writer -- has a knack for character, dialogue, and humor. This is where Original Sin shines and what differentiates it from most of the Distinguished Competition’s output over the last several years. Much like the film Clue, the mystery of the Watcher’s death is simply a vehicle to bring (usually disparate) elements of the Marvel Universe together to darkly humorous results. Surely by the time of this piece being published, the buddy cop exchanges between Punisher and Doctor Strange have made several orbits around the Internet.

Mike Deodato’s artwork in Original Sin is something of an odd fit for the tone of the book, although it’s easy-to-digest photorealism (emphasis on the photo) lends a blockbuster film feel to the proceedings. Recently, Deodato has relied more and more on the heavy use of reference to produce, often to the detriment to his style. The sight of the Watcher (who sports the visage of Deodato himself in early promotional art for the series) staring pensively out into space while standing on top of an actual picture of the moon in Original Sin #1 is jarring to say the least. Even so, Deodato provides some great action moments, especially in Original Sin #4 wherein Punisher fires a barrage of explosive shells into the Hulk’s torso, detonates the rounds via TV remote, and sends a severely angered Jade Giant flying out of a New York City skyscraper. 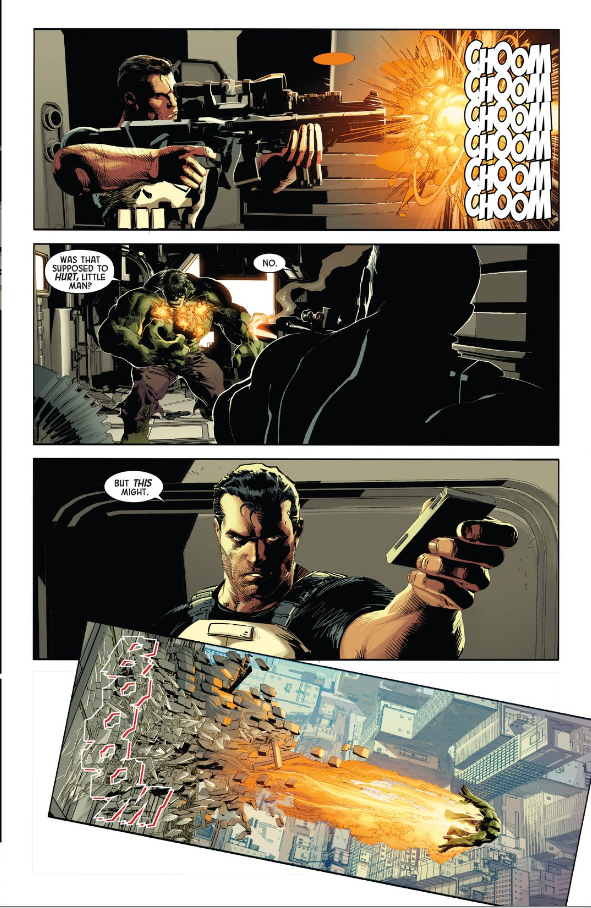 Original Sin is a dark book, but it’s not gritty for gritty’s sake. This is a distinction DC has either yet to discover or is purposely ignorant of. There has never been anything intrinsically wrong with a  grim approach but the difference between darkness for shock value (Future’s End) and illuminating character and narrative by dimming the environment (Original Sin) is a pronounced one. Jason Aaron honors the characters of the Marvel Universe and stays true to them with entertaining and meaningful moments of action and dialogue steeped in the trapping of a murder mystery. An artist more in tune with this tone would have been appreciated, but you can hardly fault Marvel for utilizing an artist that “moves units” as the old saying goes.

The Direct Market sales for Original Sin have not been as high as past events for reasons that aren’t immediately apparent. Perhaps the murder mystery format doesn’t scream “event” to fans. But the truth remains, this is more than an above-average event comic — it’s a great one. Original Sin brings characters from all over the Marvel Universe together in a way that feels organic and important without resorting to foolhardy attempts at building a new threat out of thin air and imbuing them with retroactive menace (Fear Itself). Nor does the event rely upon the grotesque on-panel fridging of a female character to activate its plot (Identity Crisis). Aaron and Deodato create conflict naturally and logically by using Marvel’s history as a staging ground. And the reveal of the Watcher’s secrets is certainly one of the more seamless modes of retroactive continuity ever employed by either Big Two publisher.

If the sales of Original Sin are any indication of the future performance of the remaining issues, it’s fair to say the wrong lesson will be learned upon its completion. In the critical sense, the industry needs more stories like this one, action-packed, meaningful, and humorous. Marvel and DC need to allow for creators like Aaron to do what they do best, they need to not be afraid of great storytelling. Only then will stories be what they want them desperately to be: events.