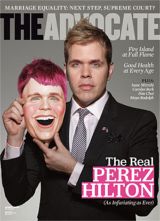 Recently I took a look at celebrities, pop culture novelties and politicians who could make intriguing material and subjects for comic books. In doing that, it became readily apparent that one person in particular was already perfectly positioned to be the subject of his own comic book without much polishing or imagination on my part! That person is none other than noted gossip blogger Perez Hilton!

I say this with no intention of mockery at the proclaimed "queen of all media", but more as a realistic explanation of circumstances, events and people that already exist in his world. Perez Hilton already has all the basics for his own comic book series, no matter what you may personally think of his antics, persona or material from his website, one that he frequently updates and that has thousands upon thousands of readers daily!

Let's look at the facts, shall we?

Origin Story: Like a lot of comic book heroes and characters, Perez Hilton's origins and rise start with a set of unique circumstances. Think of Peter Parker! Working for a while as an actor and worker in several gay organizations and publications in New York, it was his decision to take up blogging that landed him fame and notoriety, especially after his blog was featured on television entertainment show The Insider. Would something like this be easily depicted in a pivotal first issue/origin story of our protagonist? Perhaps! It would be interesting to see how Perez handles his newfound "power", how to use it responsibly, what are the circumstances if he abuses it? Drama! Human emotion! Readership!

Public Persona: Most superheroes have a public identity and a private identity. Their private, real names kept secret for their and their family's safety, they're known only by their super-powered monikers. Perez is a lot like the Fantastic Four. Many people know the FF by their aliases, such as Mr. Fantastic or The Human Torch, as well as by their real names, Reed Richards and Johnny Storm. Obviously Perez Hilton is not our character's real name, but we'll not reveal his identity here!

There's also the costume! Perez is known for sporting colorful, catchy outfits that draw immediate attention and visibility, much like the duds costumed villains and heroes don on their adventures.

Powerful Adversaries: One definite trait Perez has with the heroes of Dark Horse, DC, Marvel and other companies is a "rogues gallery", maybe not on the same magnitude as someone like the Flash, but he's certainly stoked ire from fellow celebs. Consider Miss California USA, Carrie Prejean, who he had a very public spat with over the issue of gay marriage. Hilton also has addressed allegations over an incident with will.i.am of the Black Eyed Peas. He's also drawn negative attention from various aspects of the celebrity community, some of whom have sought to have him shut down for good. Sound like some familiar comic book plots?

Superpowers: What can constitute a superpower in our modern world? Can having the ability to shock, cause controversy, and use publicity as both a tool and a weapon be considered a power? If so, then Hilton is a Justice League unto himself! Like characters such as the X-Men, Hilton's powers seem innate, born and then harnessed and focused with the help of some training and experience. His power also is not like that of other humans, or celebrities for that matter!

Public Opinion: Let's address the obvious here. Some people really don't like Perez, some people love and worship him. Go to any local comic book store and you're very likely to hear great debates being waged about the virtues and vices of Batman, Spider-Man, Hellboy, and a multitude of other comic book characters. With so much variety now in the comics world, everyone's free to choose! The same can be said with gossip sites and magazines. Perez isn't the only game in town, but he's certainly one of the most famous!

With a larger than life persona, a unique personal image and plenty of public awareness and adventures, Perez Hilton has quite a good start into the world of comic book fame. The meteoric rise to fame and his tumultuous public life with and against other celebrities would make excellent material for a series of comic books, either as an ongoing series or even in an action-packed limited one. Entering into comics would certainly give him a whole other universe to blog about!

Photo Credit: Perez Hilton on the cover of The Advocate.

Perez Hilton a Comic Book Star in the Making? Why Not?

Here's Grand Theft Auto 5 Being Played With a Game Boy