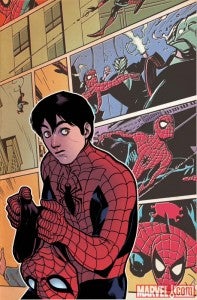 I know what some of you are thinking. You thought it, as did I for a brief bit, upon seeing that one of Marvel's upcoming new titles was Peter Parker. 'Just what the comic book shelves need,' I thought, 'ANOTHER Spider-Man title.' So imagine my surprise when I saw my hands reaching out towards the shelf at my local comic book shop and picking up a copy of Peter Parker #1, which dropped today. This latest title, written by Bob Gale, drawn by Patrick Olliffe and colored by Antonio Fabela, is a refreshing take on the character, which finds a good amount of the humor and wry wit that has been Spider-Man's stock in trade for much of his run over the past several decades, is a nice departure from some of the more gravity-laden issues of Amazing Spider-Man and the intense character studies in the almost as new Web of Spider-Man.

The story starts on a premise that's familiar to casual Spider-Man fans and devoted web-heads alike: the ongoing conflict between now mayor J. Jonah Jameson and Spider-Man. This is quickly married to a newer, more subtle conflict, the ongoing one with his new roommate Michele. It's a testament to Gale's skill as a writer that he can make us care about Jameson's Spider-Man monitoring system while simultaneously feeling sympathy for Peter when his roommate paints their home an ugly shade of peach. It's the sense of balance and willingness to pay attention to all details that makes this book, which already supports a burgeoning supporting cast with Michele, Jameson, and an interesting trio of high school girls who have big plans that may not bode well for Spider-Man.

There are several plots going on here, and I'm hesitant to say sub-plots because each seems to have equal prominence in the book. Everything seems to be of prime importance, be it a new villain, Spectrum, on the scene, the business with the high school girls, or Spidey's clever attempts to embarrass Jameson in front of the electorate. The stories are interwoven in a way that makes the transitions between each part and dilemma logical and easy to follow, not scattered and unfocused. The back-up feature "Petey" is an interesting one, but doesn't seem fully necessary when weighed against the rest of the book. Fans of Fred Hembeck will enjoy the feature, which focuses on the adventures of Peter LONG before he was Spider-Man. It's not terrible, but it doesn't feel necessary.

Even if you feel like there's an infinitely growing number of X, Avenger, Super and Bat titles out there, Peter Parker definitely stands out as one to try amongst the sea of spin-offs, one-shots, mini's and continuing series that seem to spawn from their landmark characters of origin!