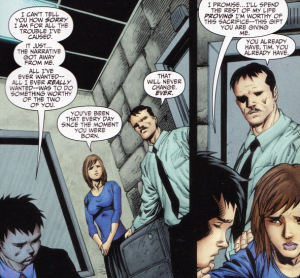 Today, U.S. and U.K. comic shops get the final wave of DC Comics's New 52 zero issues--and while we'll be looking at all of them later on, one particular story beat seems to have run away with most of the conversation on the comics Internet this morning--and that is the revelation in Teen Titans #0 that Tim Drake, better known as Red Robin (don't ever call him Robin, folks), is apparently not an orphan. It bucks the long-standing trend of having Batman and his wards all be orphans, but perhaps that's acceptable to DC since they've retconned Drake to never have been Robin in the first place. At any rate, Tim's parents are on the run for their safety and have to leave him behind--something that fills him with the same feeling of loss and blame that we've seen Bruce Wayne take onto himself in recent incarnations of his younger years, but with the notable difference that (assuming they haven't returned and then been killed again in the intervening years, his parents are up and walking around, able to be brought back as a story beat. 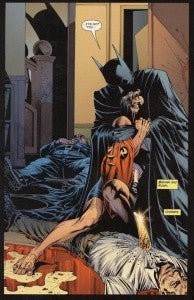 Which, of course, will likely happen sooner than later. Most of the DC zero issues are actually pilot episodes for the second year of the series, bringing a ton of new eyes to the books for the first time since the New 52's launch and hoping to capitalize on that by telling stories that tie directly back into the material teased. One assumes that part and parcel of this revelation is that Identity Crisis never happened in the world of the New 52. That's one of the stories around which there's been a fair amount of speculation, since different sources at the publisher have said that it both does and does not "count," while nothing has officially appeared in print that would give fans an idea. The story, a murder mystery revolving around the death of Enlongated Man's wife Sue Dibny, also featured the murder of Tim Drake's father in its third act.

Red Robin No Longer an Orphan in Teen Titans #0