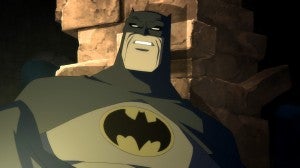 For years, I've thought that Frank Miller's The Dark Knight Returns has not aged particularly gracefully. Not because of the Reagan stuff, either, just that it's very much a relic of its time. 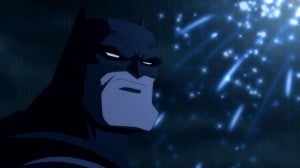 The film adaptation of the story, a two-part, direct-to-video movie, seems to have doubled down on those problems, at least as far as its first half (released to iTunes Tuesday and available on DVD and Blu-ray September 25) is concerned.

The politics of the film are decidedly latter-day Miller, and it's not entirely clear whether that's on purpose. While the comics upon which it's based were equally derisive of the granola crowd on the left and the Reaganites who were in power at the time it was released, the movie eschews the Reagan references (no longer a significant social touchstone for movies directed at teenagers, one supposes) entirely, leaving behind a movie that feels decidedly like an angry old man ranting about "them damned hippies."

Which, of course, loses some of its power when many of the events referenced by Carrie's parents (the hippie strawmen of the film) may have been significant moments for the parents of kids born in the 1980s, but the likelihood of a teenager today having parents who lament the Chicago '68 Democratic National Convention protests are probably pretty slim.

Following so close on the heels of not only Miller's own "you kids get off my lawn" comments about Occupy Wall Street but also the series of rather serious political discussions about the nature of Batman that happened in the wake of The Dark Knight Rises, this film might catch on with some mainstream press in a way that the rest of the DC Universe Animated films haven't. Here, the characters in the film are having many of the same conversations that real people were having in real life around the release of Nolan's third film.

There's little room for serious dialog on that front, of course, as Batman is unequivocally the hero of the film and anyone who stands opposed to him is mocked, either implicitly based on the stupidity of their comments and the delivery choices made by the voice actors, or explicitly by other characters in the movie.

But in spite of the fact that the people who believe it are clearly meant to be misguided at beast and "in league with the terrorists" at worst, there's a lot of discussion not just about the role of Batman as an illegal, possibly fascist vigilante, but about the psychology of the character--the ways in which he may be broken, and the fact that superheroes may have some culpability in the creation of the villains that surround them.

It's an idea that's been well-mined in the comic books, but it's not even particularly unfamiliar ground for moviegoers, given that James Gordon vocalized it at the end of Batman Begins.

"We start carrying semi-automatics, they buy automatics. We start wearing Kevlar … they buy armor-piercing rounds," the character tells Batman. "And you're wearing a mask ... and jumping off rooftops." And, in this case, as he comes out of retirement, he draws the Joker with him.

All of that aside, the production itself is well-made. Peter Weller's booming voice is perfect for Miller's over-the-top Batman, bringing gravitas and theatricality to the character. It's Weller's stock-in-trade, of course, that thing of managing to seem earnest while flirting with camp, and there's something profoundly fitting about the star of RoboCop (where a near future, crime-addled city afloat in its own satire turns to a godlike, semi-legal fascist figure for a return to peace and justice) taking on The Dark Knight Returns.

Carrie/Robin is perfectly cast as well, although with so much of the satire now directed at her family life and Alfred and Bruce frequently talking about her like she's not in the room, it almost feels as though she ought to be a point-of-view character for the film.

Another high point is the animation, which is slick and beautiful. The action sequences in particular are incredibly effective, as they're animated in a kind of choppy way that plays up the way Batman exists in the shadows, and defies much analysis of how an old man of that size could accomplish the things we're seeing him do.

The last time Warner Premiere went for a truly stylish, stylized take on one of their DC Universe films, it was Justice League: The New Frontier, which took their output to a level it had never been before and which could be viewed and enjoyed by anyone willing to watch a superhero film. It was a near-perfect distillation of what the DTV program promises fans at its outset, and it nearly wiped clean memories of the truly atrocious Superman: Doomsday film that kicked off the line. This time, you'll have nothing like that. While The Dark Knight Returns, Part 1 is well done, its script problems and an awkward, choppy pacing combine with a healthy dose of half-baked sermonizing to make it hardly an entertaining film. For appreciators of the original, or of Miller's work in general, it will likely be beloved...but to anyone who hasn't read the comics it seems unlikely to hold much appeal.

Review: The Dark Knight Returns, Part 1 Loses Itself in Its Politics