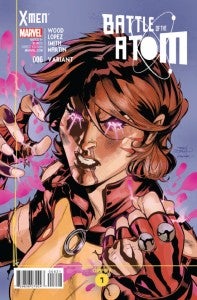 The X-Men's 50th anniversary crossover, Battle of the Atom, started off with a bang. The chapters that have followed have been interesting, but the plot's pace has slowed considerably. Whole issues feature little more than shouting matches over what to do about the time-displaced original X-Men. The sixth chapter thickened the plot by introducing a second set of future X-Men into the mix and casting some aspersions on the first group. In X-Men #6, the fur finally hits the fan and Battle of the Atom hits the ground of its third act running.

The issue begins with the X-Men returning home to the Jean Grey School with young Cyclops, Marvel Girl, and Angel. The past X-men have finally agreed to go back to their own time, but Wolverine has suspicions about the future X-Men. These suspicions are confirmed when the group finds out that young Beast and Iceman have gone to the future with Magik. Knowing that its only a matter of time before the other group of future X-Men arrive to stop them, Xorna and Xavier's group attack the present day X-Men, subduing them and bringing the school crashing down around them (in classic X-Men crossover fashion).

This chapter is a tense one. Writer Brian Wood and penciler David Lopez set the tone early on, when Wolverine and Rachel Grey begin speaking in telepathic secrecy about the future X-Men. This small bit of foreshadowing leaves the reader fully expecting Battle of the Atom's “other foot” to finally drop before the issue closes, and the story doesn't disappoint. Wolverine's suspicions about the future X-Men prove to be true and things begin moving fast. Fists fights, telepathic showdowns, and a ninja sword duel all occur within the space of a few panels, but Lopez handles the abundance of action with grace and gives each combat a shining moment, be it a brightly colored staredown between Xavier and Rachel, or Psylocke striking a formidable battle pose while cradling baby Shogo in one arm.

Lopez's art is stellar, handling the quieter moments as deftly as the action scenes. He has a talent for portraying emotion through his characters, having Xavier go from looking serene and confident in one panel to absolutely insane after losing his temper. The drastic shift in the character's expression perfectly marks the moment when the calm breaks and the battle begins. There are a couple of minor inconsistencies in some of the character designs from panel to panel, but they fail to detract much from what is, otherwise, a good looking and well told story.

X-Men #7 succeeds in finally picking up the pace for Battle of the Atom after a sluggish issue or two. It reads like a good thriller that gets your adrenaline going and has you begging to turn the page and see what happens next. It ends with a final reveal, the arrival of the X-Men's cavalry, and perhaps an opportunity for a certain former X-Men leader to regain some favor in the eyes of his ex-teammates. All of this looks very promising for the crossover's final few issues and fans won't want to wait for the next one.

Review: X-Men #6 Brings The Battle To “Battle of the Atom”