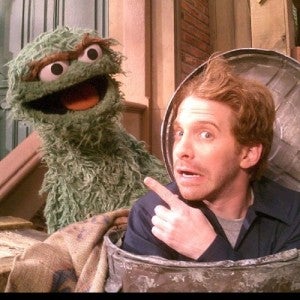 Seth Green, the Family Guy and Robot Chicken actor who plays Rick Jones on the upcoming Disney XD series Hulk and the Agents of S.M.A.S.H., told Blair Butler on a special Fandom edition of Earth's Mightiest Show on Wednesday that he'd never particularly thought of the role--until it was offered to him.

"So this all happened because Jeff Loeb, who I've known for a good long time," Green explained, "who writes comics, who's pretty awesome, called me and was like 'Hey… do you know who Rick Jones is?' and I was like yeah yeah I know who Rick Jones is… he was like 'Did you ever think about playing Rick Jones?" And I was like [shocked face] no til just this second. He was like 'Would you want to play Rick Jones on a cartoon?'  I was like if I was ever going to get play a Hulk, because Joss didn't call me about Bruce Banner, chance is it would be in this circumstance. So I'm doing it."

He also gave a little insight into the nature of the series, saying, "This show is an attempt to show the Hulk as something more than a monster. So Rick Jones has created a reality show - he's got robot cameras that are following him all around. And he captures the Hulk, and She-Hulk and the Red Hulk and Scar and other Hulk-like characters doing good things, helping people…not just destroying stuff. That's what it is: 'hey look the Hulk is awesome, he's not a monster!'"

Seth Green Discusses Getting His Role on Hulk and the Agents of S.M.A.S.H.