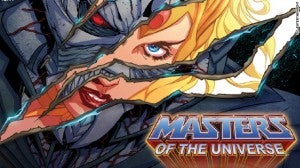 DC Entertainment is doing so well with their He-Man and the Masters of the Universe miniseries and digital-only origin reboots that the publisher has apparently decided to release a digital one-shot featuring She-Ra, detailing a re-envisioned version of her origin written by former Blackhawks scribe Mike Costa. "Readers unfamiliar with her history might be surprised to learn that she was a very different person before that transformation," Costa told CNN, "but the hero she would become is there, slumbering inside of her, and that's what our story is really about." The artist, meanwhile, responded to a "darker, more unusual" version of the character's origin than fans of the 1980s cartoons may remember. "I think the trick for me was drawing this version of She-Ra as not really evil but detached and cold," artist Drew Edward Johnson said. "She wasn't born as this deadly Hordak enforcer but was made one, and over the course of the story, we can see how she's been kept in line and made to do things that are against her nature. I tried to show in a couple of close-up shots that her eyes are not those of a killer, and in those shots, divided her face down the middle with the panel borders to show her split nature." "Fans are thrilled to see He-man and the Masters of the Universe back in action," Mattel executive Rob David said of the DC Comics. "Not everybody wants to see any changes, of course, but He-Man -- ever since he first premiered -- has evolved. Hey, when he first came out, there was no Prince Adam! So long as you stay true to the core concepts, it's always fun to explore the possibilities."

She-Ra, Princess of Power Gets a Digital Comics Reboot