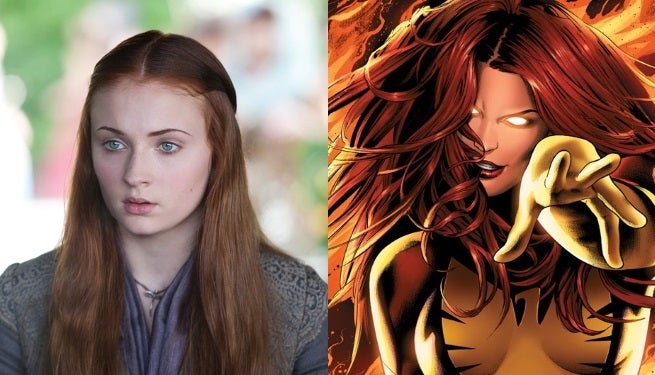 Sophie Turner, the young actress who plays Sansa Stark on HBO’s Game of Thrones, recently landed the role of Jean Grey in the upcoming X-Men: Apocalypse. With her X-Men debut still in pre-production, she’s likely focused primarily on the soon-to-premiere fifth season of Game of Thrones, but she recently took some time to discuss her big new role.

Turner speculates that part of the reason she got the part as Jean is because of her character’s “Dark Sansa” turn in Season 4 of Game of Thrones.

"I think maybe one of the reasons that they chose me for [Jean] is because they saw the dark side of Sansa," Turner told IGN. "Maybe they're thinking, 'Oh, Phoenix, Jean Grey.' I definitely see a lot of parallels in there… [Jean] struggles with her power... and not being accepted in the human world. I think in terms of [Game of Thrones], that's kind of the way Sansa felt in that she really wanted to be a normal princess/queen and live a normal life -- and she doesn't, because of all this havoc happens. I think Jean, in a way, feels that."

Turner goes on to say that she’s hoping to bring something different to the character than her predecessor, Famke Janssen.

"I think Famke played Jean incredibly well, but also, I'm playing a younger version of her," Turner said. "I want to emulate Famke in a sense, because she has to seem like the Jean in the first two movies, but I'm also going to put my own twist on her. I think I'm also going to take inspiration from the comics. I don't know, we'll see."