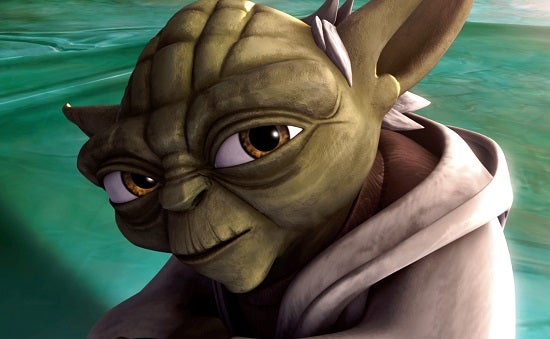 During a Reddit AMA session in support of this weekend's release of Star Wars: The Clone Wars on Netflix, voice actor Tom Kane -- who played Yoda on the fan-favorite series -- told fans that he would come back for more Clone Wars "in a second," but cautioned that it might have been better that they didn't...for an unexpected reason. "[Star Wars: The Clone Wars] got better every season. It's probably good we didn't go to more seasons, or your TV would have exploded," the actor joked, adding, "Seriously, though, It is AWESOME that Netflix and Lucasfilm and Disney worked out the deal they did. The episodes they finished in Season Six are incredible. The four-episode "Yoda Arc" is some of the best work I have done. Would I do more? In a second. I'm pestering Dave Filoni to throw me into Rebels a few times....He will." The hit series ran until last year on Cartoon Network, when it was cancelled to make room for Star Wars: Rebels, a series that will reportedly bridge the gap between the existing Star Wars film canon and Star Wars Episode VII, due in theaters in December of next year. [Note: the timeline for Rebels is set between the prequel trilogy and the original trilogy, but characters introduced there have been said to have an impact on the Star Wars universe leading up to Episode VII. Sorry for any confusion our poor phrasing may have caused.] The decision was made partially as a means of separating Lucasfilm from Cartoon Network and allying them with Disney XD, following the acquisition of Lucasfilm by Disney and the simultaneous announcement of the new Star Wars trilogy. The company has behaved similarly in the comics field, stripping Dark Horse of the Star Wars license beginning in 2015 and handing it over to Marvel Comics, a subsidiary of Disney. In the course of the conversation, Kane (who voices Woodhouse on Archer: Vice and Quincy Sharp in the Arkham series of video games) also admitted that he'd have liked to work on Star Trek, The Avengers and Thor.

Star Wars: The Clone Wars's Tom Kane: "Would I Do More? In a Second."