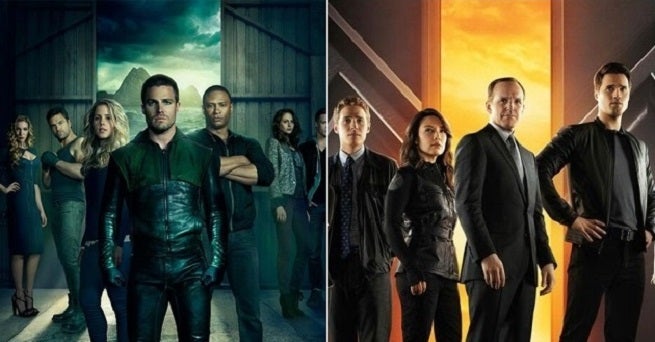 Stephen Amell has never been one to stoke the DC-versus-Marvel fires, saying repeatedly when asked that he doesn't see much point in comparing Arrow and The Flash with Marvel's Agents of S.H.I.E.L.D. and that he finds inspiration in Robert Downey, Jr.'s portrayal of Iron Man/Tony Stark.

Now, he's taken it one step further as a Facebook Q&A with fans in support of his latest t-shirt campaign with Represent, fundraising for F*ck Cancer, telling fans he'd love to cross over with Marvel's Agents of S.H.I.E.L.D. if such a thing were possible.

Asked what series he would cross over with (presumably besides The Flash), Amell answered, "Agents of S.H.I.E.L.D. Just because....because why not?"

The Flash and Arrow will cross over starting tonight at 8 p.m. ET/PT on The CW.

Stephen Amell Wants To Do An Arrow And Agents Of S.H.I.E.L.D. Crossover