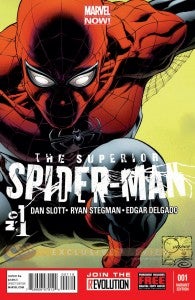 Dan Slott and Marvel Comics have been determined to impress upon readers that when Superior Spider-Man starts up, it's a whole new ballgame for the titular hero, and that the decades of history with Peter Parker under the mask may well be over.

Still, in an interview promoting his upcoming Alpha series, writer Joshua Hale Fialkov said in an unambiguous way that Peter Parker would still be alive, working at Horizon Labs, and mentoring Alpha come time for that series (something we can see in preview art at the link below), which occurs after the events of Amazing Spider-Man #700. That allowed a lot of fans to breathe a sigh of relief, knowing that they weren't planning on killing the character, or even writing him completely out of the stories in the way they did when Ben Reilly briefly took over as Spider-Man during the Clone Saga.

Today, though, Marvel Senior Editor Steve Wacker took to Comic Book Resources to tease the next era in Spider-Man's publishing history, and to intimate that Peter is gone and never coming back. And while his first answer seems to tease the return of Reilly himself in the new book, cover art released in the interview certainly seems to tell a different story.

"I think for years to come the shadow of Peter Parker is going to be draped over the book," Wacker told CBR. "There's nothing you can do about that. But new cast members will come in. Life goes on. Peter Parker fans will sort of fade away over the months and years, and you'll have a bunch of people who only know the new cast. It's probably similar to what happened with Ben Reilly back in the day. And fans seem to want him back." 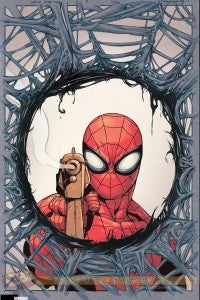 Wacker is, of course, a pretty smart guy and knows that there's no such thing as a fan base that fades away in comics. There was a significant enough movement to bring back Barry Allen that even after he had been gone for decades, one of those fans rose to a position of prominence at DC Comics and reversed nearly 25 years of character evolution for the Flash titles to make it happen.

"I do think that what Scarlet Spider and Venom have shown is that we're not afraid to make real, lasting change to the characters," Wacker said of a pair of former Spider-Man supporting characters now redesigned in their own titles. "Whether it'll last forever? I don't know. I don't know what's going to happen 20 years from now when Marvel Comics are being downloaded into your eyes. But I do know that as far as we're concerned, this is the status quo. We have no plans to get away from this."

Again - take that with a grain of salt. "This is the new status quo" is the kind of thing we've heard about every earth-shattering upheaval in comics ever to end six months later. Wacker probably even said something similar when Animal Man and Booster Gold died in 52...but of course Animal Man was back the next week and Booster not long after that.

He did tease a team-up between Daredevil and the Superior Spider-Man, saying that the first meeting between the new Spider-Man and the rest of the Marvel Universe will take place in a Daredevil issue that will be released at the end of this month, just after Amazing Spider-Man #700. 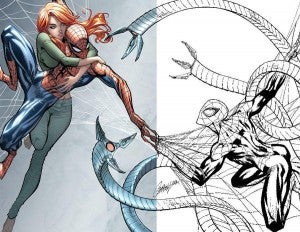 "And then in January, you see a fully-fledged team-up between the two, and we see Superior Spider-Man getting into some of those relationships that Peter had fostered over the years," the editor explained. "Coming up you’ll see the character in Avengers and Journey into Mystery as well as in Age of Ultron."

Of course, regardless of the calculated name-dropping of Ben Reilly, it's hard to imagine that character being put back in the Spider-Man role and trying to convince fans it's fresh. Also, the preview art and covers feature the new-look Spidey mask which, contrary to concept art, doesn't so much look "alien" as it does like there's a lens in the mask's eyes. That could reflect either the recently-returned Norman Osborn, who has consistently had that sort of thing going on in the eyes on his Green Goblin masks, or (arguably more likely) Doctor Octopus, who of course is the odds-on favorite anyway, given that he's currently residing in Peter's body and all. 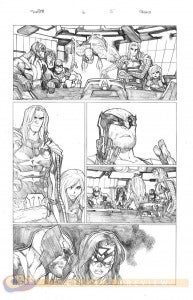 The Doc Ock theory seems to be supported by the covers above, a pair of interlocking Superior Spider-Man covers by J. Scott Campbell that show Spider-Man and Doctor Octopus in the position of God, reaching out to Adam in Michaelangelo's Sistine Chapel ceiling. Of course, that could also just be implying that Ock's mad science had somehow "created" the new Spider-Man, and not that he's necessarily the same person.

Still, it's clear some view the character as a threat, or at least with suspicion; check out the art page at right, as The Avengers discuss the Spider-Man issue.