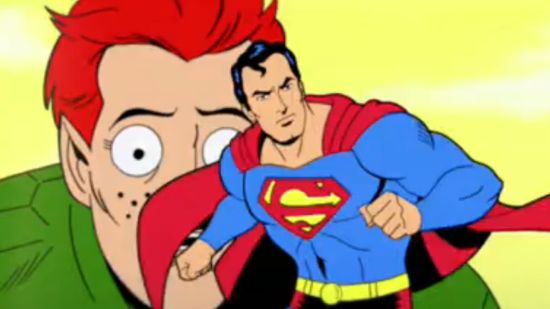 During the Superman 75th Anniversary Panel at the 2013 New York Comic Con, Warner Bros. screened the Superman 75th Anniversary animated short, which was crafted by Man Of Steel's Zack Snyder and animator Bruce Timm. Fans in attendance were warned not to videotape the short, but Warner Bros. has now released the short online through Entertainment Weekly. We've embedded the short below.

The short features animated takes on the Siegel & Shuster Superman, the classic Fleischer animated shorts, the live-action George Reeves and Christopher Reeve Superman portrayals and versions by comic book artists like Neal Adams, John Byrne, Dan Jurgens and Jim Lee. Specific storylines that appear in the short include Superman’s classic ’70s boxing match with Muhammad Ali, the Death of Superman and the Superman Red/Superman Blue storyline from the ’90s, as well as a glimpse at the New 52.

The short even contains an appearance by Jimmy Olsen as Turtle Man. “Basically, it was a way to get Jimmy Olsen in there. We were having a hard time getting the supporting cast in,” explained Timm to EW. “But Turtle Man is a really iconic cover. We tried to cover all the bases, and wanted to show both the serious Superman and the wacky Superman.”

The animated short will also be available on the upcoming Man of Steel Blu-ray Combo Pack, which is set to be released on November 12, 2013.