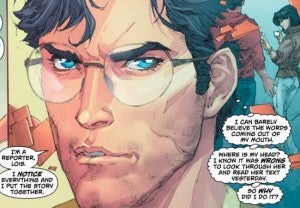 While Superman’s relationship with Wonder Woman might have taken a romantic turn, one woman (no matter how wonderful she is) doesn’t appear to be good enough for the Man of Steel. No, Superman appears to also have his eyes set on Lois Lane in a creepy stalker type of way.

In Superman #13, Clark Kent used his x-ray vision to read one of Lois Lane’s text messages without her permission. When Clark Kent discovered the test message was about Lois Lane moving in with her boyfriend Jonathan, he angrily quit his newspaper job at The Daily Planet in a huff.

In Superman #14, Lois Lane goes to Clark Kent’s apartment to try to convince him to beg Morgan Edge for his job back. When Lois Lane talks about how strong their friendship is, Clark Kent seems to be put off by Lois classifying their relationship as a friendship. Clark says, “Friends. Interesting. As my friend, I guess I hoped you would have told me you were moving in with Jonathan this morning.”

After angrily confronting Lois on her relationship with Jonathan, Clark thinks, “I can barely believe the words coming out of my mouth. Where is my head? I know it was wrong to look through her and read her text yesterday. So why did I do it?”

After Lois fires back that she has nothing to apologize for, Clark says, “One minute he seems like he’s your random booty call—the next he’s the love of your life. He’s a great guy. I understand why you want to be around him. I guess I just wonder where does that leave us…me?”

Lois then has to remind Clark, “It leaves you where you’ve always been Clark—from almost the moment we met. You’re my best friend. That is not going to change ever.”

Secretly spying on Lois Lane’s text messages even though he knows it’s wrong, erratic behavior like suddenly quitting his job, thinking he’s entitled to be consulted on Lois Lane’s personal decisions, showing jealousy over Lois Lane having a boyfriend even while he’s dating Wonder Woman…yes, it looks like Superman has officially become a creepy stalker.