Ever look at a solicitation and wonder if anyone else noticed the characters, plot hints, or Easter eggs that you picked up on?

Well, we've done just that for some of DC's July releases so join us as we surf the solicits for you lovely comic fans out there. 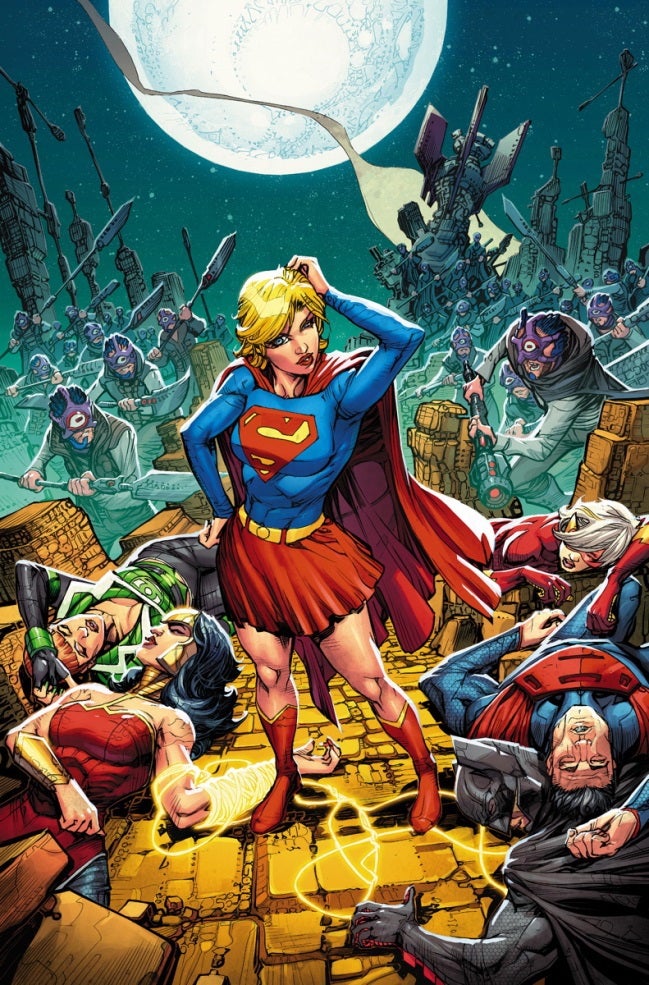 Art and cover by HOWARD PORTER

It's a bird! It's a plane! It's...Supergirl? Aww, for crying out loud, we were promised that someone would rein these guys in. Supergirl? Really? Trust us...it's actually pretty cool.

From that solicitation text, you probably get the idea that this series is constantly in danger of derailing from the sheer level of wackiness. I'm not sure if that's the case but the premise is definitely an odd one. Taking place in the 31st Century of an alternate reality of DC's New 52, this series is led by genetic clones of the current DC Universe's greatest heroes. It also features a Justice League International-era Booster Gold and Blue Beetle who were apparently unfrozen in this same future. So, yeah, this series is a little bananas, but in a good way. 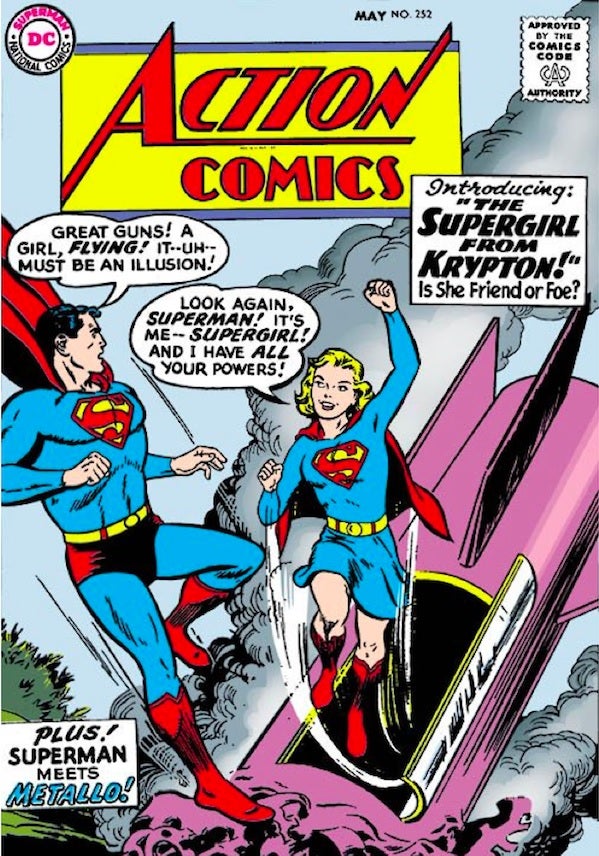 The reason we've latched on to this solicitation is the appearance of Supergirl looking very much like her first appearance in Action Comics issue 252 from 1959. Heck, the only real difference in her appearance is the red skirt which in the traditional DC Universe would become her standard attire shortly after that initial appearance.

Coupled with the presence of the aforementioned Booster and Beetle, the apparent introduction of the original Kara Zor-El is just one more piece of evidence suggesting that JL3000 is not the future of the New 52 as we know it. Our best guess is that her appearance here will be handled courtesy of her pod from Krypton getting diverted somehow and keeping her in stasis until releasing her into this semi-dystopian future. 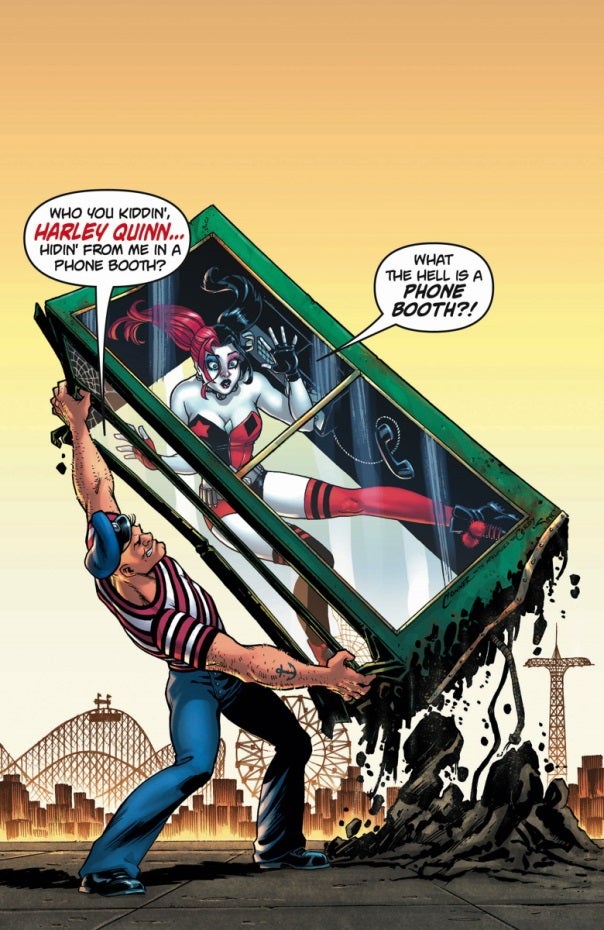 The Gang of Harleys rocks on with a super fun appearance by Captain Strong! Yes, that is a real character, we promise!

Who is Captain Strong? Short answer, he's DC's answer to Popeye who briefly menaced Superman back in Action Comics issue 421 from 1973. In fact, you'll note that this Harley Quinn cover is an homage to this 1973 "classic" and Strong has barely changed aside from reining in his then-fashionable bell-bottoms. The slightly longer answer is that Strong is a sailor who becomes super-powerful by eating seaweed grown from alien spores. That's right, Popeye teaches kids to eat their spinach while Captain Strong teaches kids to eat their unidentified plant life of dubious and unknown origin… YUM!!! 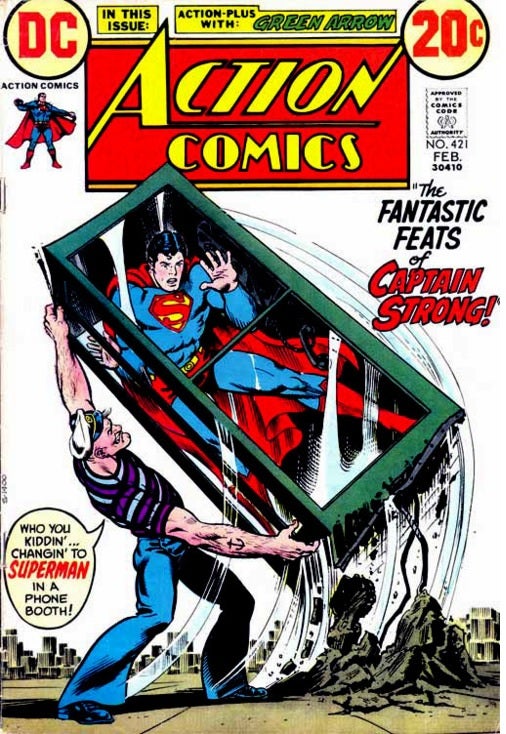 Driven mad by the Clown Prince of Crime's "Joker Wave," The Joker's former prison doctor enters the Caped Crusader's Rogues Gallery as The Harlequin! Then, a team of Batman's greatest enemies takes over an advertising agency to create a new public image for themselves. But the agency has a new temp working for them…none other than Barbara Gordon, young daughter of Gotham City's police commissioner!

I love Batman '66. The reason I'm calling out this issue is that it's only the fourth time in this series that we will have seen the introduction of a villain not featured in the original series. The prior ones were Lord Death Man, Clayface, and Solomon Grundy. While Lord Death Man's debut already hit stands and was an excellent read, those of us waiting for physical releases are still in the dark about Clayface and Grundy. Oh, and you'll note that I'm not counting Two-Face since he only appeared in Batman '66: The Lost Episode and hasn't yet appeared in the series proper. 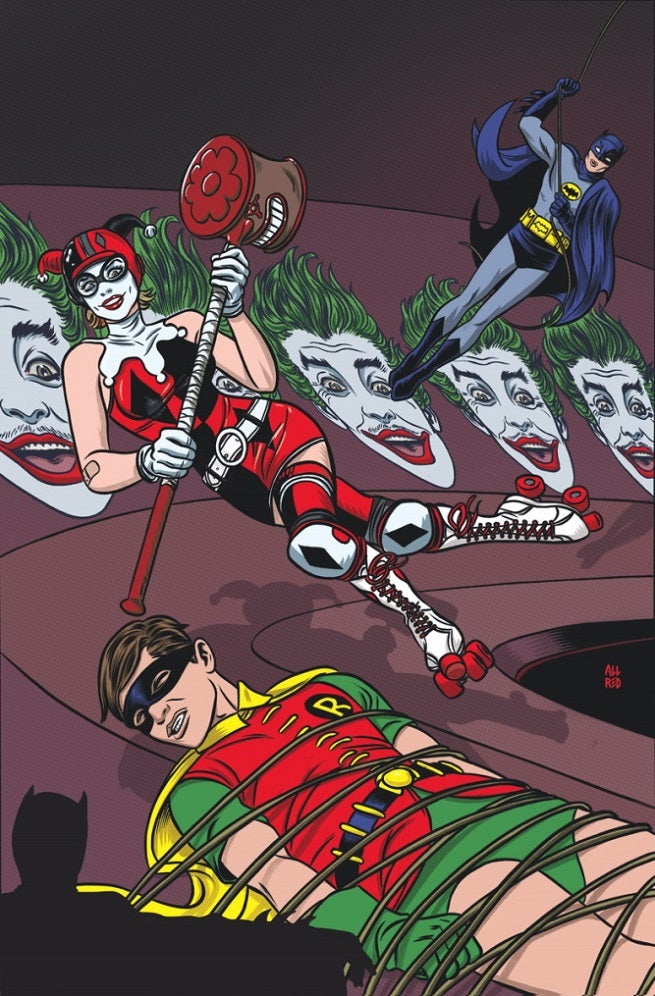 Part of the reason I love this series is because it handles story telling in the way I personally believe comics work best. Each issue is a self-contained story which may or may not include a short back-up tale as well, but each entry into the series can contain seeds that help to build the larger universe and develop continuity. Harley's upcoming debut as her villainous alter ego was built up by two prior appearances as Dr. Quinn (Psychiatrist Woman). Her first appearance was in Batman '66 issue 7 where she introduced herself as the new psychiatric specialist for the Arkham Institute's Deep-Security Ward. It's revealed here that she's working to help treat the madder of Gotham's criminals including the Joker.

This version of Harley would appear again Batman '66 issue 11, where she became a pawn of the Joker in his and Catwoman's plan to use a scientific device to broadcast the Joker's brainwaves throughout Gotham, driving the populace mad. In the end, Dr. Quinn would sacrifice her own sanity by using her sane brain waves to reverse the device's effects.

If you ask me, this might even trump Harley's traditional origin since here it's more than an infatuation with a murderous madman and his manic manipulation that drive her to madcap mayhem and malicious malfeasance. Anyway, I know I'll be first in line to pick up this issue when it drops… Same Bat-Time, Same Bat-Spot-On-The-Comic-Shop-Rack!!! 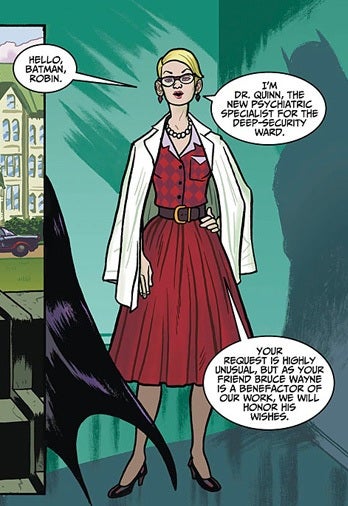