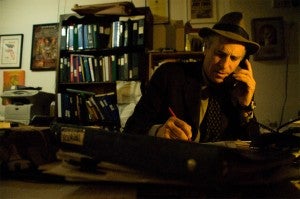 Political cartoonist and graphic novelist Ted Rall has been tapped to write and draw a 48-page comic book within the pages of New York Times-bestselling inevstigative journalist Greg Palast's forthcoming Election Games: Billionaires & Ballot Bandits, ComicBook.com has learned exclusively. "We're overjoyed to be working with Ted again," Palast told ComicBook.com."we consider him part of the investigative team, especially as he's a first rate journalist himself--Read Silk Road to Ruin, if you have any doubt. He told the story of Central Asia long before anyone else cared." The book will be published by 7 Stories Press later this summer and will focus on the way money influences elections, and the shady tactics used by political parties and special interests to limit their opponents' right to vote. Rall's comic portion of the book will thematically tie in with the rest of the book, telling stories centered around Palast's globetrotting investigative journalism (just yesterday, Palast broke the story that BP hid important details of a 2008 oil spill from American regulators). According to the Palast Office, the plan is to also release the comic as a separate, digital-only release around the time of the book's release and at a lower price point. 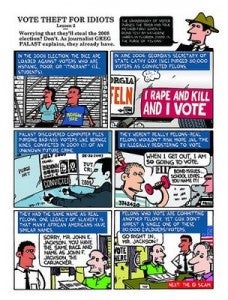 Palast and Rall worked together shortly before the 2008 US Presidential election as well, co-creating (with Robert F. Kennedy Jr., Lukas Ketner and others) Steal Back Your Vote, a voter's guide funded by Palast's donors and the non-profit Palast Investigative Fund. It provided insight into common ways that voters could be mistakenly removed or barred from the voter rolls and how to fix your registration if you believe there is a problem. Palast says that while the contracts aren't signed yet, the deal is in place and work has already begun to get the comic together in time for the July publication date. More information on Election Games can be found at their Kickstarter page, where Palast is raising funds to pay the comic and fund research and travel expenses for this and other projects. Palast was also happy to note that since the two share a publisher, they'll be able to cross-promote one another's projects, as Rall has a book coming out shortly before Election Games, and is already funding his next one via Kickstarter. Palast most recently published his first new book in five years, Vulture's Picnic--a "pulp nonfiction" that dramatizes life in the Palast Office and turns Palast and his closest confidants and opponents into over-the-top versions of themselves while still crafting a story where all the facts are true. In the back of that book, a teaser image appeared suggesting a Vulture's Picnic comic book and featuring art by Transmetropolitan's Darick Robertson. Palast says that project is still in development, although the time-sensitive nature of getting out a book on the election pushed this one to the front of the line. Robertson's Transmetropolitan co-creator, Warren Ellis, recommended Palast's work to fans just yesterday, along with that of New Statesman reporter Laurie Penny, when asked by a fan who they might follow on Twitter that evoked the sense of Spider Jerusalem, the outlaw journalist at the heart of Transmetropolitan. Rall's new book, The Book of Obama: How We Went From Hope and Change to the Age of Revolt, will be released through 7 Stories in June. We'll have an interview with him regarding Election Games soon. 7 Stories Press has recently started getting very serious about comics and graphic novels; in addition to Palast's and Rall's projects, they will be releasing a three-volume, slipcased set called The Graphic Canon in October, featuring great works of literature reimagined by cartoonists from R. Crumb to Will Eisner.