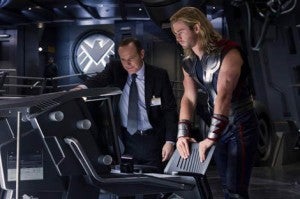 In an interview with The Huffington Post, Marvel's The Avengers director Joss Whedon sidestepped whether Clark Gregg's fan-favorite character (S.H.I.E.L.D. Agent Phil Coulson) might return in The Avengers 2 as The Vision, instead focusing on the process by which such a decision might be made.

It's been a fan-favorite theory since the release of The Avengers, when Coulson appeared to die fighting Loki but a lack of detail and some apparent inconsistencies with Nick Fury's story led some fans to believe that Whedon and his co-writers had more in mind for the character.

Clark Gregg, for his part, started out by saying that he wasn't particularly interested in playing a character with powers--or in playing a robot, as he worried he would lose the humor and humanity that made Coulson so compelling. More recent interviews, though, seem to have him softening to the possibility somewhat.

"I have some power, you know? I think there's a level of trust," said Whedon. "You know, Kevin Feige and I have always had mutual respect, and on the first movie he was very supportive. But there were definitely things where they were like, 'Hmm, we don't see that.' And I think now Kevin's in a place where it would be more like, 'We don't see it, but we think you do.'"

"That doesn't mean they're just going to roll over and I'm going to say, 'Oh, it's Great Lakes Avengers and we're going to get Squirrel Girl and you're gonna love it,'" the director joked. "You know, they need to believe. But all I want to do is make the movie that they want. And so it's been great."

The Avengers' Joss Whedon Won't Say No To Coulson As Vision