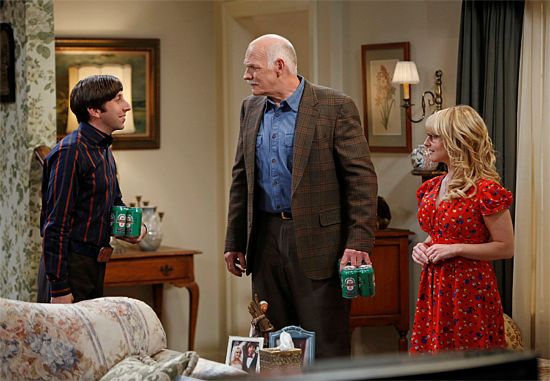 CBS has released two sneak preview clips from tonight's episode of The Big Bang Theory, which is titled "The Thanksgiving Decoupling." In the first clip, Howard invites Penny, Raj, Leonard, and Sheldon to Thanksgiving at his mom's house. Sheldon initially declines, saying, "I loved to go, but unfortunately that sounds awful." Penny says that they had planned to have Thanksgiving at the apartment. However, Leonard says it might be a nice change of pace not to listen to Sheldon criticize his cooking all day. After some prodding, Sheldon relents, and everyone agrees to go to Howard's mom's house for Thanksgiving. The second clip shows Bernadette and Howard unpacking groceries, while Raj prepares a Thanksgiving Day meal. Raj quips, "It wouldn't be Thanksgiving without an Indian providing the food." Even though Howard is resistant, Bernadette tells him to go out and spend time with her father while she helps Raj with the meal. In "The Thanksgiving Decoupling" episode, Sheldon protests when the gang drags him to Mrs. Wolowitz's house for Thanksgiving. Meanwhile, Penny and Leonard must deal with a mistake from her past. "The Thanksgiving Decoupling" episode of The Big Bang Theory airs on Thursday, November 21, 2013 from 8:00 PM to 8:31 PM ET/PT on CBS.