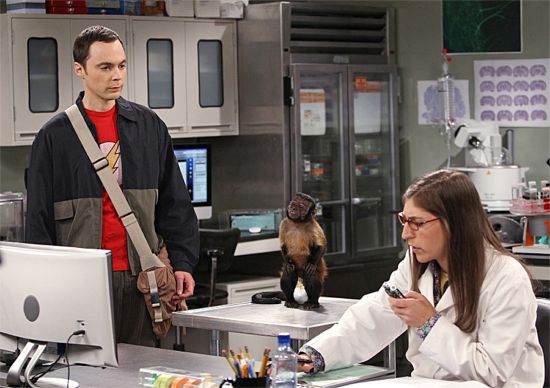 CBS has released a sneak peek clip from tonight's episode of The Big Bang Theory, which is titled "The Workplace Proximity." In the clip, Amy tells Sheldon that she's been invited to consult on an experiment at his university for a few months. Amy suggests that they could have lunch together and carpool together. Sheldon tells her that riding with Leonard has gotten tedious, because the only car game Leonard wants to play is the quiet game. Amy asks Sheldon if he might not be concerned about them working in such close proximity to one another. Check out the full video below to hear Sheldon's response to Amy's question. In "The Workplace Proximity," Sheldon must decide how much "Amy time" is too much after she takes a job at his university.   Meanwhile, Howard finds himself sleeping on Raj's couch after a fight with Bernadette. "The Workplace Proximity" episode of The Big Bang Theory airs on Thursday, October 17, 2013 from 8:00 PM to 8:31 PM ET/PT on CBS.