Marvel Comics has made the following press release and preview images available in advance of next week's release of Avengers: X-Sanction #1, which will kick off the coming battle between the Avengers and the X-Men:

The Top Secret First Step Towards AVENGERS VS X-MEN Is Revealed! 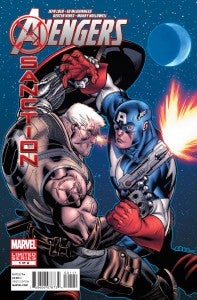 The opening salvo in the upcoming war between the Avengers and X-Men is fired in next week's Avengers: X-Sanction #1 from the chart topping team of Jeph Loeb and Ed McGuinness! The time-traveling mutant known as Cable, has returned from the future with 24 hours to save the world…by destroying the Avengers?! What makes Earth's Mightiest Heroes such a threat to a better tomorrow? Cable's on a mission to prevent the tragedies that lead to the events of Avengers VS X-Men…and every move he makes irrevocably changes the direction of the Marvel Universe!

"On the eve of the biggest Marvel event—maybe ever—Ed McGuinness and I are thrilled to be the lead-in forAvengers VS X-Men," said Loeb. "Hopefully longtime fans and first time Cable, X-Men and Avengers readers will be excited by a story that can be read entirely on its own -- and at the same time has lots of stocking stuffer-esque surprises just in time for the holidays." It all begins with Cable versus Captain America…and only one will emerge victorious! The Avengers and X-Men are on a collision course…and the first steps towards war are taken in Avengers: X-Sanction #1, available in comic stores and on the Marvel Comics app next Wednesday! Retailers: Please note that Marvel is rush printing a second printing of Avengers: X-Sanction #1 due to expected demand and its relationship to Avengers vs X-Men. Check the Marvel Mailer and Diamond Daily for more details. AVENGERS: X-SANCTION #1 Written by JEPH LOEB Art & Cover by ED MCGUINNESS ON SALE – 12/14/11 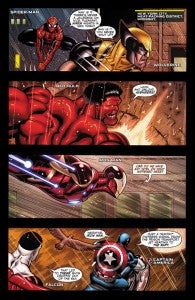 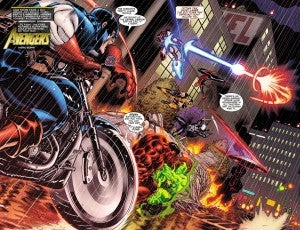 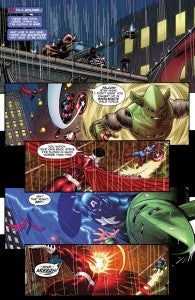 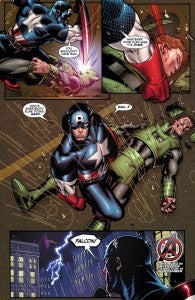 The Top Secret First Step Towards AVENGERS VS X-MEN Is Revealed!