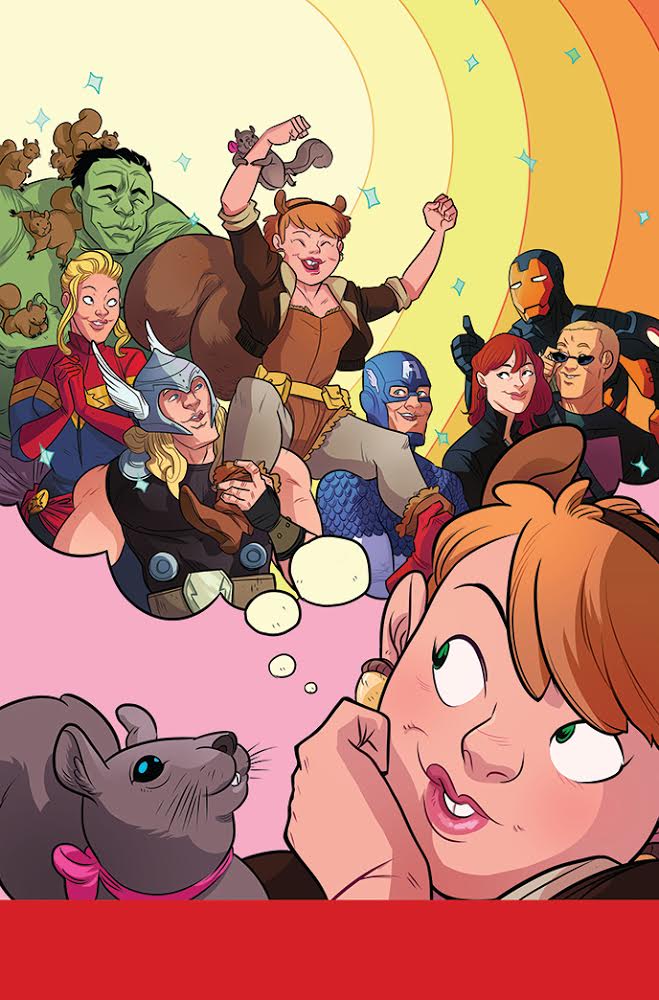 Fun is an adjective that doesn't receive nearly enough credit in superhero comics. Being fun is often perceived as synonymous with being simple or childish, and that's complete baloney. Creating fun comics is difficult. Infusing words and images with energy that pulls readers in, makes them laugh out loud, and leaves them begging for more is something rarely accomplished in superhero comics.The Unbeatable Squirrel Girl #1 is a very fun comic.

Erica Henderson establishes the tone of The Unbeatable Squirrel Girl perfectly on its cover. It's big and boisterous in nature. Both characters and composition are exaggerated with so much energy that they appear set to burst. There's also a farcical element to it, poking fun at both itself and the genre it occupies. This cover is a promise of a good time and Henderson's interiors don't fail to fulfill that promise. Each page contains the same kinetic joy found in that image of Squirrel Girl being hoisted into the air by the Avengers.

One of Henderson's greatest accomplishments is her use of exaggeration and humor. There's nothing subtle about the character of Squirrel Girl; it's apparent in every panel. Whether she is flirting with another student or tackling a classic Spider-Man nemesis, everything she does feels big. Emotions, reactions, and action: It's all blown up to the size of a big screen in Times Square. Although her methods for battling a super-villain are amusing, her personality is best displayed in more mundane sequences. Henderson sets Squirrel Girl apart as being bigger than life, but doesn't make her entirely alien to this world. There's still a connection, but when going by her civilian identity of Doreen Green all ordinary actions and responses are cranked to 11.

Rico Renzi's color work pairs with Henderson's cartooning very well. He decorates the world with pastel colors that illuminate each page. They work to supplement the story, highlighting the child-like joy found in Squirrel Girl and her adventures. This also reveals Renzi's flexibility as a colorist. He has always leaned into bright palettes that pop in comics like FBP and Edge of Spider-Verse #2. While those displayed a more cool, punk rock aesthetic with a hard edge, he capably adjusts to the softer, warmer tone of this story.

Ryan North, the creator of Dinosaur Comics and writer of Adventure Time, is a perfect fit for the character of Squirrel Girl. His past work reveals a clear understanding that terms like "fun" and "all-ages" don't preclude comics from being smart. North doesn't confuse innocence and naïveté with simplicity or childishness. The result is a fun, all-ages comic that is accessible and, more importantly, enjoyable for readers of any age.

The script sets up Squirrel Girl's world with ease, following her through move-in day at her new college. North introduces a supporting cast whose personalities are made clear in brief, but insightful interactions. The most significant personality of The Unbeatable Squirrel Girl #1 is that of the comic itself. There is a tonal consistency to everything that happens within these jam-packed 20 pages. It doesn't matter where the story may lead, it's clear that it will be filled with joy, laughter, and so much energy.

North, Henderson, and Renzi's work all combines to create one of the most fun debuts published by Marvel Comics in a very long time. If you're looking for a comic that you can share with anyone or that will cheer you up after a major bummer of a day, this is it. At the end of The Unbeatable Squirrel Girl #1 there is only one question worth asking: When does #2 come out?

The Unbeatable Squirrel Girl #1 is an Animated, Amusing Affair (Review)