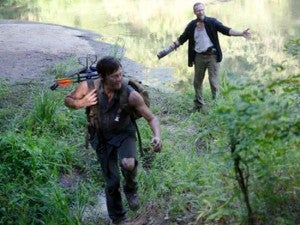 Rooker continued, “I mean we built these two characters independently, yet at the same time, they came out feeling like brothers. Totally, these two guys felt like that we had grown up together. There was history. And how that works, you know, I’m not sure if anybody really knows. It’s just sometimes you jive with the material, you dig it, you jive with the other actor, man, and you’re just riffing on, and it just becomes this musical orchestra, a duet if you will. And we just hit it off you know on the set, and we just kept on doing it.”

Rooker added, “Whenever they put us together, whenever we had a scene together, it would inevitable be the scene that almost every fan of The Walking Dead would talk about. Whenever we would get together, hell man, sparks would fly, and we would just go at it and kick ass. People dug it.”

Michael Rooker also had high praise for the rest of The Walking Dead cast as well. Rooker said, “I really find it so exhilarating and amazing and fun to work with actors that stimulate and move your performance forward and make it magical. There are several, several actors in our show The Walking Dead, I still call it our show, that do that and connect with other actors in that way. And it’s pretty damn amazing when you get that from a group of actors in an ensemble.”