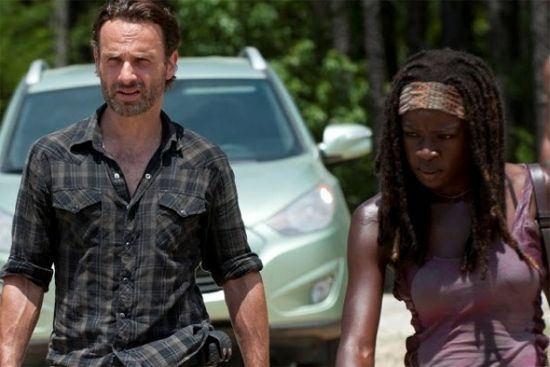 During an appearance on Jimmy Kimmel Live on Tuesday night, The Walking Dead’s Danai Gurira dropped a shocking spoiler about Season 5.

“I’ll tell you this much. I had an amazing time really opening her [Michonne] up,” said Gurira. “She was very, very enigmatic, kind of very stoic, very distant. So it was really cool to open her up this season and really get to know her more with the audience. And open up her maternal side and show that part of herself where she’s actually had that. And she starts to connect with Carl, and it so works perfectly with what’s going to happen with her and Rick having a baby. And so….”

Then, Gurira got an awkward look on her face and went quiet. Kimmel asked, “You’re saying there will be a baby on the show?”

Gurira stuttered, “Jimmy…can we cut that...”

When Jimmy said that everybody already heard her, Gurira yelled out, “April Fools, y’all.”

Gurira added that her boss Scott Gimple wrote the April Fools' joke for her.

While the Rick and Michonne baby might have been a joke, Gurira did reveal that The Walking Dead Season 5 was going to start filming in about a month. She also added that she was meeting with the writers this week.