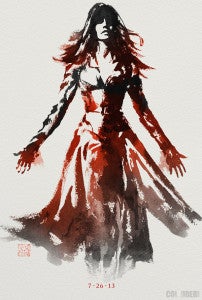 Jean Grey may be a big part of The Wolverine, this weekend's expected box office king and the most recent X-Men film to come out of 20th Century Fox starring Hugh Jackman--but there was quite a while there where the studio didn't want anyone to know.

Actress Famke Janssen, who played the character in a trio of previous X-Men films and reprises the role in The Wolverine, spoke yesterday about the challenges of keeping such a big story secret, and about having it blown by the trailer when she thought she still had to be on her best behavior.

"The studio called me and said it's a big secret, we want to keep it a secret, can we do this?," Janssen told MTV News' Josh Horowitz in the video seen below. "Of course they have an entire crew knowing about it and nobody's supposed to leak it, and you hope that it doesn't happen. And they still have to fly you to Sydney and, you know, be on a plane with people and then land there. So it's a lot of hurdles to go through, but we went through all of them."