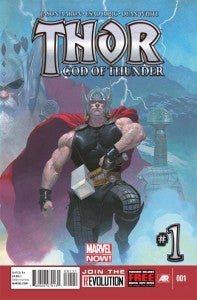 Marvel has released a new cover for Thor: God of Thunder #1, coming in November from the "worthy" creative team of Jason Aaron and Esad Ribic.

A time-jumping action epic, Aaron describes the series to Newsarama as a tale of many Thors.

In part. I do flash back and show a young Thor in action, but he’s actually just one of three Thors that I want to focus on. This first story is an epic tale that plays out over the course of thousands of years. So we spend time with young Thor in the Viking age — the young, hotheaded god of the Vikings, who loves to come down to Midgard and get into trouble.

In the present, we see Thor the Avenger on a journey that takes him to the far corners of space, interacting with all sorts of new space gods and wondrous new locations.

And then we also see old King Thor, who’s the last king of Asgard, thousands of years in the future, where something has gone horribly, horribly wrong.

Linking all these eras and Thors together is one villain, an all-new character, who is basically, at least initially, a serial killer of gods. He’s a guy with a serious axe to grind against all immortal beings in the cosmos, and he’s going around doing his best to kill them all off, one at a time, as brutally as possible. That villain’s story unfolds over the course of all these different eras. He starts as a serial killer of gods, but by the end, he has become something even more frightening.

It's interesting for a number of reasons, not least of which is that it may be the first time a Marvel title has given a substantial amoutn of attention to the Viking-era Thor--obviously a time when the concept itself kind of cut its teeth. This different approach to the character will be broad-based, too: Aaron says that we won't see a lot of Thor interacting with the Marvel Universe in this title (although it Iron man will make an appearance in the series's third issue).
Start the Conversation

Thor: God of Thunder by Aaron and Ribic Officially Announced