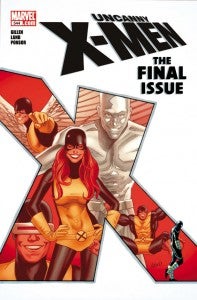 It's shaping up to be an interesting month in the world of comic books. First, DC Comics announced that they would be re-launching their superhero universe in new first issues, which means Action Comics will never reach a thousand. Now, Marvel is also putting an end to the numbering on one of its longest running series. Yes, it's the end of an era, as Uncanny X-Men #544 will be the final issue of the long running series.

According to a Marvel press release, the events of X-Men Schism tear the X-Men and the Marvel Universe apart, which results in the state of mutantkind being irreparably changed forever. The Uncanny X-Men #544 is scheduled to arrive in comic book stores in October. It will be written by Kieron Gillen with pencils and cover by Greg Land. X-Men: Schism #1 goes on sale on July 13, 2011.

Uncanny X-Men Coming To An End