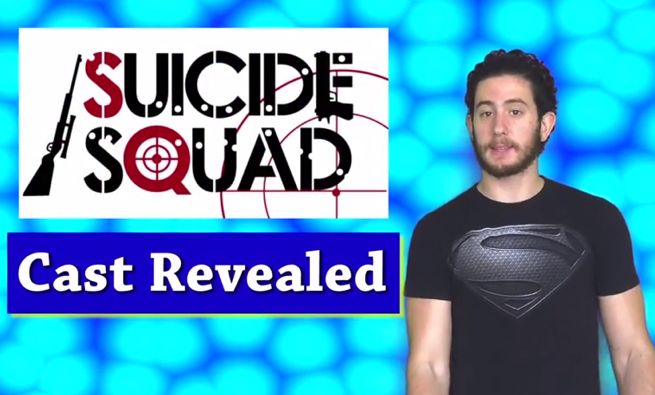 It’s been a packed few weeks for movie trailers. As you must know by now, the 88 second teaser trailer for Star Wars Episode VII was released online last week. The trailer debuted to over 58 million views in its first week. Super heroes were no match for the nostalgia, as the video broke the record for most views within a week of being uploaded, which was briefly held by the Avengers: Age of Ultron that was released just a few weeks ago. The Avengers would’ve lost the title anyway, because the Jurassic World trailer also raked in almost 54 million views.

This week Warner Brothers announced the cast for their 2016 Suicide Squad movie. The film will feature Will Smith as Deadshot, Tom Hardy as Rick Flag, Jared Leto as the Joker, Jai Courtney as Boomerang, Cara Delevigne as Enchantress, and Margot Robbie as Harley Quinn. Casting has not been finalized for Amanda Waller, but rumor has it: Oprah Winfrey may be up for the role.

SPOILER WARNING! That’s a courtesy AMC failed to extend to some of the fans of it’s hit series The Walking Dead, but seriously, SPOILER ALERT! You’ve been warned! This week marked the midseason break for The Walking Dead, but it also marked the end of the road for a beloved character. After a season full of development for her, we had to say goodbye to Beth. Dawn claimed her with a bullet to the head, just before Daryl took Dawn out of the equation in retaliation. The moment was extremely emotionally charged, especially seeing a strong character like Daryl break down and carry Beth’s body out of the hospital. AMC ruined this for several million viewers by posting this image from the scene prior to it even airing on the west coast in the U.S., so they issued an apology to fans, and claim they will do their best not to spoil major moments in the future.

This week, Comicbook.com debuted a sneak peak at the 50th anniversary variant cover of the Inhumans comic book. In that preview, though, Marvel may have given us confirmation that the secret city from Agents of Shield is actually Attilan. We know Marvel is no stranger to Easter Eggs, no matter how small. This one seems like a bit of a catch. If you look at the floor in Black Bolt’s throne room, you’ll see markings on the floor, identical to those of the alien writing featured on Agents of Shield which leads Shield and Hydra to a secret city. Although the cinematic and comic universes are not connected, the stories tend to mimic each other, and this does seems more like an indication than a coincidence.

The Flash vs. Arrow two part crossover saw the heroes not only team up, but face each other head to head. More importantly, though, it gave us our first look at Robbie Amell’s long rumored Firestorm. No one knows when exactly we will see Ronnie Raymond again or what the future holds.

So, that’s five, but I’ve got a couple bonus stories to share with you. Ryan Reynolds will be playing Deadpool, and the movie is set to go into production in March. And finally, Benedict Cumberbatch is actually confirmed to be Doctor Strange. On behalf of Comicbook.com, I’m Brandon Davis, I’ll see you next week.