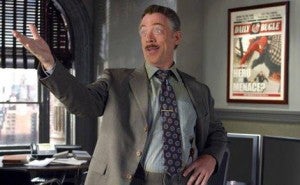 J.K. Simmons, widely accepted as the best part of Sam Raimi's Spider-Man movies, has been asked quite a lot lately about returning to the role in sequels to this summer's The Amazing Spider-Man. The actor, who played J. Jonah Jameson in the three Raimi films, told reporters at the Television Critics' Association that it seemed unlikely he would return.

“Well, the Spider-Man thing, for those of us who were doing the first franchise, that rug got pulled out from under us like two-and-a-half years ago, you know. So, that water is well under the bridge," Simmons said. "I love making those movies with Sam and with everybody, and we had a great time. Now, the studio is doing a different version of it.  But that seems like ancient history. And, because I don't get out much, I haven't seen the movie or the Broadway play or the cartoon, which I do a voice on.”

That voice, of course, is J. Jonah Jameson, meaning that he's already reprising the role in the Ultimate Spider-Man series on Disney XD--and it probably won't be out of the question for him to do so again in the forthcoming Avengers Assemble animated series, which reportedly will share a "universe" with Ultimate Spider-Man.

The absence of J. Jonah Jameson, or of any substantive appearance of The Daily Bugle, the newspaper Jameson rules with an iron fist, in the first film has led to speculation that Simmons might return. As have rumors early in the production that the actor would be retained from series to series--something that producers have said only failed to happen because the character was not used in the script.

Later in the day, he told a reporter from Crave Online that he would be willing to consider returning to the role on the big screen, though, in spite of his rather dour assessment of the possibilities at the TCA press conference.

“Oh, I’m open to anything,” The Closer star said. “Obviously that was enormous fun playing that character. A big part of the fun was doing it with Sam and with Tobey. Like I said I literally have not seen the movie. I don’t even know tonally how different it may or may not be. I’m a fan of the actors, the director and everything else. Yeah, I’m always open.”