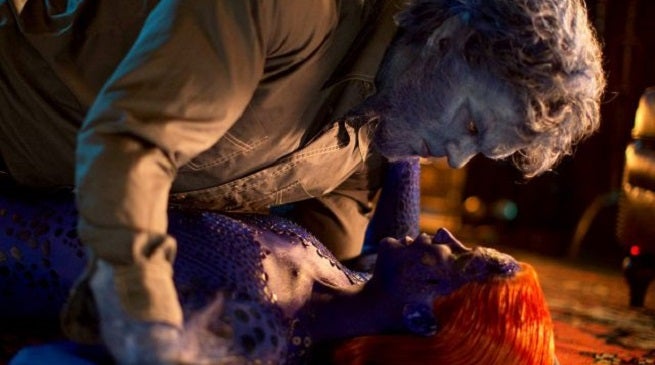 Get ready to see a lot of blue. And maybe some keytar.

X-Men and Fantastic Four writer/producer Simon Kinberg, in a new interview in support of next week's Blu-ray and DVD release of X-Men: Days of Future Past, said that the film will explore the relationship between Jennifer Lawrence's Mystique and Nicholas Hoult's Beast.

"I will say that [X-Men: Apocalypse] is definitely the close of a trilogy for those First Class characters, which isn’t to say we won’t see them in future movies, hopefully we will, but it’s a completion of an arc for them," Kinberg told Collider. "I think that the friendship between Erik and Charles, which has always been so integral to the franchise, is something we’re continuing to explore and hopefully deepen with Apocalypse. And the relationship between Beast and Mystique is a really interesting one that we didn’t have a lot of time to explore in Days of Future Past, so we’ll have an opportunity to do more of that in Apocalypse."

That's arguably not all that surprising; Mystique was a key focus in First Class and her profile only rose in Days of Future Past. The film, loosely based on a story in which Mystique also played an important role, was a convenient choice given that Lawrence became a mega-star in between films with The Hunger Games.

Kinberg had plenty more to say about the upcoming production, in particular the idea that the "period" feel established in X-Men: First Class and continued in Days of Future Past isn't going anywhere just yet. The next film is set in the 1980s, and according to Kinberg, that's something that he and director Bryan Singer plan to use to its full potential.

“We’re having a lot of fun with the idea of the '80s," Kinberg said. "It’s a decade that Bryan and I both grew up in and so the music, the style, the aesthetic, the legacy of '80s movies is something we’re really having fun with.”

X-Men: Apocalypse To Have Fun With The Eighties, Explore Beast & Mystique Relationship