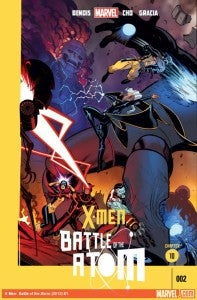 With X-Men: Battle of the Atom #2, the curtain finally closes on the ten part crossover event. Unfortunately, the closing chapter isn't nearly as strong as the opening ones, but the finish will still leave X-Men fans with a lot to look forward to in coming months.

The final showdown takes place at Cape Citadel, where S.H.I.E.L.D. has shown up to reign in the X-Men. Thanks to Xorn's guile, the Helicarrier's entire weapons arsenal is launched against the mutants, including some S.H.I.E.L.D. branded sentinels.

The three-way battle that ensues between Xorn's Brotherhood, the X-Men and the sentinels is picturesque, thanks the Esad Ribic's art, but also a bit hard to follow. Individual scenes are well rendered, but the overall layouts of Ribic's pages aren't as full and lush as his work on Thor: God of Thunder, and the storytelling is a bit muddy and hard to follow, lacking in connective tissue.

Jason Aaron's script is similar in style, packing in as many iconic X-Men moments and homages as possible, but without giving them a narrative flow. In one panel, Magik is losing control of herself and reverting to her Darkchylde persona, and then the next time we see her she's back to normal with no explanation. There are also a couple “fastball specials” and a recreation of the cover to the original X-Men #1, which are all nice thoughts but feel a bit piled on. Its also something of a contradiction when the X-Men decide to allow one of their future members to stay in the present after just talking a few pages earlier about how they should never, ever time travel again. There are reasons for making this exception, but its a bit much to swallow.

When the dust settles, readers are treated to four epilogues that serve as teasers for the next “season” of the various X-Men books. Wolverine and the X-Men rededicates itself to its mission, X-Men takes on a new mission statement and a surprising new member, Amazing X-Men is set to launch and begin the quest to save Nightcrawler from the afterlife, and Bendis' side of the X-Men universe sees a character switch sides in the ongoing standoff between Wolverine and Cyclops (in a scene that inexplicably has everybody wearing their pajamas). Marvel NOW! has been very good to X-Men readers, and All New Marvel NOW! looks like it will continue the trend.

The opening chapters of Battle of the Atom were fantastic because they felt so different from other X-Men crossovers, focusing on characters rather than combat. Where the finale fails is in how it feels so similar to past X-Men crossovers, with an abundance of action but short on closure – which, to be fair, is something you expect from indefinitely serialized fiction. The ride was worth taking, even if the conclusion wasn't totally fulfilling, and it looks like there's still plenty of good times ahead for fans of the X-Men.

X-Men: Battle of the Atom #2 Review