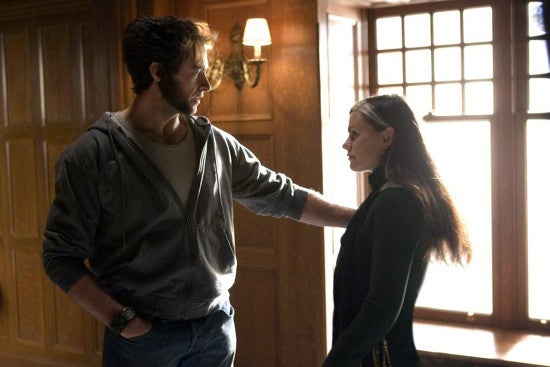 In the years since the original X-Men, Anna Paquin has become one of the hottest young performers in genre entertainment, with her starring role on True Blood has made her a kind of "geek goddess."

But it couldn't save her screentime in X-Men: Days of Future Past, as director Bryan Singer has confirmed that Rogue will no longer appear in the film at all after Paquin's only scene was cut.

Entertainment Weekly reports "that a rescue sequence — shot early in the film’s production and featuring the modern-day incarnations of Magneto, Professor X, Rogue  and Iceman — has been cut from the final film."

“Through the editing process, the sequence became extraneous,” Singer told EW. “It’s a really good sequence and it will probably end up on the DVD so people can see it. But like many things in the editing process, it was an embarrassment of riches and it was just one of the things that had to go. Unfortunately, it was the one and only sequence Anna Paquin was in, the Rogue character was in. Even though she’s in the materials and part of the process of making the film, she won’t appear in it.”

He had nothing but praise for Paquin, saying that the cut had nothing to do with any of the performances, including or particularly hers. “She did a fantastic job,” said the director. “She was awesome in the sequence. She’s a brilliant actress. I would work with her in a heartbeat.”

“She completely understood,” he added, saying that he told her before it ever got out to the press. “It’s very disappointing, but she’s very professional and she knows that stuff happens, particularly with material you shoot early on in production. Films evolve.”

Rogue's role in the storyline was never entirely clear from what little is yet known about the film. Both behind-the-scenes and official photography has shown Shawn Ashmore (Iceman, and Rogue's most recent love interest in the films) and Ellen Page sharing screen time and meaningful glances, so there was some speculation that Rogue could be involved in some kind of love triangle with Shadowcat, who played a key role in the comic book version of Days of Future Past.

X-Men: Days of Future Past: Rogue Will No Longer Appear