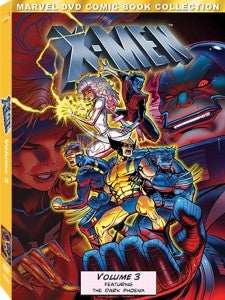 After holding their collective breath for a DVD release after the ending of Fox's acclaimed animated television series X-Men, fans of the show finally were able to exhale earlier this spring, as volumes one and two of the show were released for the first time on *ahem* sanctioned DVD's. Following that, news came late yesterday afternoon that volumes three and four of the show will hit store shelves this fall.Coming from Walt Disney Studios Home Entertainment, X-Men volumes three and four will be released this September 15th. These two volumes contain some of the most important story arcs in the series' history. Volume three will contain the entirety of "The Dark Phoenix Saga" with volume four containing the fan favorite episode "Have Yourself a Morlock Little X-Mas" and story arcs such as "Proteus" and "Beyond Good and Evil." It should be noted that the DVD's are being released in the order that they were aired, not necessarily the order in which they were written. Be sure to catch up on volumes one and two before diving in to this next batch. Don't worry, you've got time!

X-Men: The Animated Series Volumes 3 and 4 to see a Fall Release