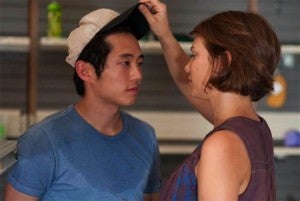 With its third season coming in October, the cast and crew of The Walking Dead are starting to hit the news with a little more substantive information than the "it's gonna be awesome" that they were allowed to give fans for the months between the end of season two and the beginning of San Diego Comic-Con International. And so, in a new interview with MTV, both Steven Yeun (who plays Glenn on the show) and Lauren Cohan (who plays Maggie) dished on what's next for their characters going into the show's third season, one that proves to be a game-changer for most of the survivors as they hole up in the prison and square off with The Governor and his acolytes in Woodbury. Cohan, who was recently promoted to series regular, discussed the dichotomy of being a character with a boyfriend and a father to shelter her, but who's got it in her to kick some zombie tail. "She's a strong character. When we first see Maggie, she's swinging a baseball bat from a horse," Cohan told MTV. "We know that girl exists and she hasn't had to necessarily show these colors yet. You can't sit around anymore. She gets to step up with the boys, trying to pave the way to safety." Yeun, whose character has played a major role in recent issues of the comics, says that the most important thing for Glenn is protecting the people he loves and helping to keep the group safe and alive. "What's great about season three is you start seeing a symbiotic relationship not just amongst Maggie and Glenn, but amongst the group," Yeun said. "The key is survival. Survival brings people together, because you need people to survive. What's great about Maggie and Glenn's situation is, it's kind of a pairing. It's a very solid pairing of two that can carry out one thing very effectively."