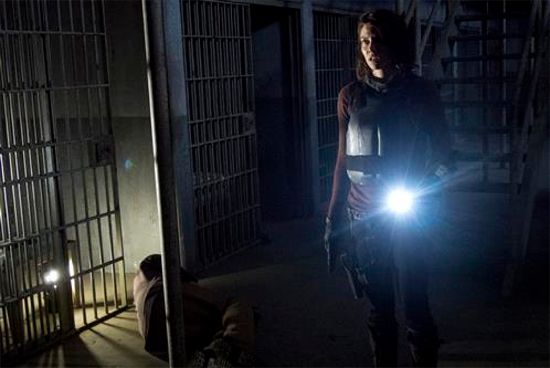 The "Internment" episode of The Walking Dead opens with Rick Grimes driving back to the prison, after having sent Carol on her way at the end of the last episode. As leaves blow in the wind, a solemn Rick stares down at the watch Carol gave him as he drives. Back at the prison, Hershel is treating one of the ill named Henry, who is coughing up blood and struggling to breath. Glenn and Sasha help as Hershel inserts a breathing tube into Henry's throat. As Glenn and Sasha cough, Hershel instructs them to drink some of his tea. Hershel tries to lighten the mood by saying they need to make some new rules before the others get back. He declares that they should have spaghetti Tuesdays on every Wednesday, but first they must find some spaghetti. Hershel asks Sasha to take over pumping the breathing apparatus for the patient. Then, he invites Glenn to go on his rounds with him. Hershel shines his light to look at a man whose mouth is covered in blood. The man is motionless, and Glenn pulls out his knife to keep the man from turning, but Hershel stops him. Hershel doesn't want Glenn to do it in front of the others, so he asks Glenn to help get the dead man on a gurney. Lizzie shows up and asks Hershel what they are doing, and Hershel says they are taking Mr. Jacobson to a quieter place. Hershel tells Lizzie to go and get his copy of Tom Sawyer that her assignment is to read it, but Lizzie says she won't finish it. When Hershel asks why, Lizzie says because it's going to get too dark. After Lizzie leaves, Glenn and Hershel wheel Mr. Jacobson away. Glenn asks Hershel if he's had to take care of any of the dead yet, and Hershel says no that Sasha took care of doing what needed to be done for the last person that died. As Mr. Jacobson starts to revive as a walker, Glenn stabs him in the head. Maggie is waiting behind the glass visiting window at the prison. When Hershel walks out by himself to meet her, Maggie demands to know where Glenn is, and Hershel reassures her that he's just resting. Maggie offers to come in and help as well, but Hershel says no. Hershel assures Maggie that they are going to make it and asks her to hold it together. When Hershel walks back into the sick area, Glenn is waiting just inside the door. Glenn thanks Hershel for stopping Maggie from coming inside. Glenn didn't go with Hershel, because he was afraid if Maggie saw him that they wouldn't be able to stop her from entering to be with 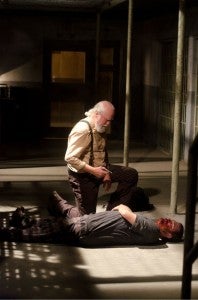 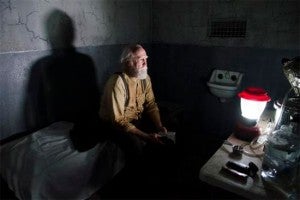 he interior fence, Rick and Carl mow them down. Inside the prison, Hershel is coaxing the walkers to him. Maggie is still struggling to get inside the sick area, and she finally shoots out the glass visitor window. As the walkers get closer to Hershel, he blasts them away with the shotgun. Hershel reaches Glenn, who is now couching up a lot of blood. Hershel tells Glenn to hold on that they have something that will help. Hershel rushes to get the breathing apparatus that is still attached to walker Henry, who he had flipped over the railing. Maggie is looking for Hershel and dispatching walkers as she goes. She comes across Hershel struggling with the walker with the breathing apparatus. Maggie is about to shoot the walker, when Hershel yells that she might hit the bag and that they need it for Glenn.  Maggie takes close aim and shoots the walker without hitting the bag. Maggie rushes to Glenn, who is not turning blue. Maggie holds Glenn down, while Hershel rushes to insert the breathing tube.  Glenn starts breathing again, and Maggie tells him that he's going to be ok. Hershel tells Maggie that she didn't want him in there, but Maggie tells him that she had to come inside. Then, Lizzie comes walking around the corner. Hershel tells Lizzie that he told her to stay put, and Lizzie asks if it is over. Outside the prison, Carl and Rick are stabbing the remaining walkers in the head that they mowed down with the automatic rifles. As Carl reassures Rick that everything is going to be ok, they see Daryl and his group driving up. Tyreese rushes inside to see how Sasha is doing. As Bob Stookey administers the medicine to Glenn, Maggie tells Hershel to go rest. Hershel goes back and stares at Dr. S's body. Hershel reads scripture from his bible, before he breaks down sobbing. Rick walks outside the prison, where Michonne is dragging away walker bodies. Rick offers to help, but Michonne says to go do his thing. Rick say she has to go talk to Daryl, but Carl interrupts, so Rick decides to wait. Hershel meets up with Daryl and Tyreese. He tells them that Glenn is stable. Daryl says that Glenn is a tough son-of-a-bitch and so is Hershel. Daryl asks Hershel if Carol is up in "A" block with Lizzie, and Hershel says that Daryl needs to talk to Rick about her. Hershel reassures Daryl that Carol is ok, but he just needs to talk to Rick about it. Michonne is heading out to dispose of the walker bodies, and she invites Hershel to come along. Rick and Carl are tending to the crops, when the camera pans outside the prison. Standing in some trees  outside the prison gates is The Governor. The End.