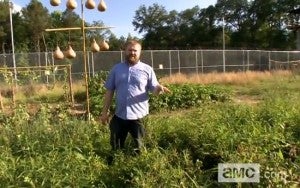 AMC has just released a brand new behind-the-scenes video for The Walking Dead Season 4. In the video, Walking Dead creator Robert Kirkman takes fans on a tour of the new look of the prison. Since the end of Season 3, Rick Grimes and his group have apparently been hard at work at the prison, building up a farming community. Kirkman shows off the fenced in area for Michonne's horse as well as pen for pigs. "They keep pigs here in the prison this season," explains Kirkman. "You know, it's a good source of food, I guess, if you're into that. But I have to say for legal purposes that we don't actually eat the pigs." In perhaps the most interesting scene, Kirkman claims to get bitten while trudging through the garden at the prison. Don't worry, it wasn't by a Walker, as Kirkman yells out, "I'm being bitten by a snake right now." The Walking Dead Season is scheduled to premiere on Sunday, October 13, 2013 on AMC.