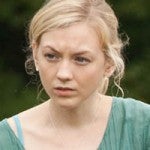 Earlier today, AMC released a brief interview with actress and musician Emily Kinney, who plays Beth Greene on the network's hit adaptation of Robert Kirkman's comic book series The Walking Dead. Along with discussing her upbringing in Nebraska (one of the places we know for sure is in pretty rough shape on the show), she told the interviewer that, having had a chance to sit back and watch the show's second season, she now wants to kill a zombie. "At first I was just so happy to have survived myself," said Kinney in the interview (that's probably a fair take, since her character attempted suicide). "But now watching the show, I have to kill a zombie! I feel like it will make me a stronger character. I don't know if I will, but I'm hoping!" There seems to be a pair of unspoken observations buried in that comment--first, that seeing the completed, edited show has changed her perspective somewhat, either on her character in specific or just the show in general; second, that she feels her character is not as strong as she needs to be. The latter is probably a fair assessment, and one shared by most viewers given that Beth didn't have a lot of screen time this year, apart from her anxiety-induced coma and subsequent suicide attempt. AMC's The Walking Dead will return in October, with its second season curently available through video-on-demand sites like Amazon and iTunes. If last year's pattern is followed, the season will be released on DVD and Blu-Ray shortly before the season begins, and available on Netflix shortly thereafter.

The Walking Dead's Emily Kinney: I Want to Kill a Zombie