Drakkon's never been more powerful, and the Rangers are mounting their final assault to take him down.

It will require not just the Mighty Morphin Rangers though, but the other Ranger allies they've managed to save from Drakkon's grasp. They aren't the only ones moving against Drakkon though as Grace and Promethea aren't going down without a fight.

Our exclusive preview of the anticipated issue features three beautiful covers. The first features shattered helmets from Rangers all cross the timeline surrounding Drakkon's throne, drawn by Jamal Campbell. The second cover features fan favorite Red Ranger Andros (In Space) front and center in an homage to Countdown to Destruction drawn by Jordan Gibson. The third features the franchise's Black Rangers and is drawn by Joana Lafuente.

You can find the official description of Mighty Morphin Power Rangers #30 below and the covers can be found in the gallery.

"In Mighty Morphin Power Rangers #30, from writer Kyle Higgins and artist Daniele Di Nicuolo, it's the team up between every Ranger left standing against the unrivaled power of Drakkon, while a covert team led by Grace embarks on what might be their last mission ever. This issue features a main cover by Jamal Campbell (Green Arrow), with variant covers by Jordan Gibson (America) and Joana LaFuente (Transformers)." 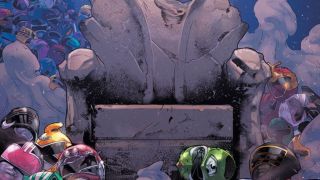 This issue should provide even more insight into Lord Drakkon's Great Campaign, something writer Kyle Higgins has teased in earlier issues.

"Well, The Great Campaign is something that's been on Drakkon's mind for quite a while, and has been ... Actually, it pre-dates our series and it's something that we're going to learn. What exactly that entails and what he is trying to achieve will play out over the next several issues, including Free Comic Book Day issue," Higgins said. "Including The Annual, which takes a look at different eras of Power Rangers teams across the Shattered Grid. Or I guess at this point, Fractured Grid. And also in issue 27 as Drakkon begins his campaign, his assaults, his broader assault on these different teams of Rangers. He's looking to amass power and consolidate ... He's looking to consolidate and amass power, as well as control influence on these worlds."

So, what do you think of Mighty Morphin Power Rangers so far? Let us know in the comments!