The covers pair the characters thematically and ask important questions about their fates in Star Wars: The Last Jedi. The first pairs Rey (Daisy Ridley) with Kylo Ren (Adam Driver) and asks "Will Rey Fall To The Dark Side?"

The second cove shows Finn (John Boyega) with new character Rose Tico (Kelly Marie Tran) and asks, "Can Finn Get His Mojo Back?" Fans will remember that Finn was badly wounded in his showdown with Kylo Ren in Star Wars: The Force Awakens.

The third cover pairs Poe Dameron (Oscar Isaac) with Vice Admiral Amilyn Holdo (Laura Dern) and asks, "Can Poe Get Along With His New Boss?" The question seems to reveal that Holdo will be taking over control of the Resistance for General Leia Organa, or at least that she will be in direct command over Poe and his squad. 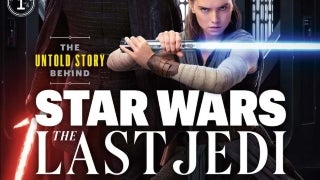 Take a look at the covers in the attached gallery.

Entertainment Weekly also revealed a portion of its interview with director Rian Johnson, who reveals that he was not precious in his treatment of Star Wars' venerable characters.

"There's a history in Star Wars of the attraction between the light and the dark, whether it's the story of Anakin basically turning from this sweet kid and seeing his seduction to the dark side, or even with Luke," Johnson says "Even though you never really believe he's going to go over to the dark side, the whole revelation of 'I am your father' has to do with Vader and this darkness that [Luke] thought he could just dismiss as 'That's the bad guy. I don't have any of him in me. Suddenly he realizes 'No, I come from him. I have quite a bit of him inside me.'"

Star Wars: "Master and Apprentice" Is the Perfect Epilogue to Obi-Wan Kenobi