Like hero cards, the Green Goblin will have a two-sided card - Norman Osborn can Scheme to add Threat to the scenario card, while the Green Goblin can directly attack heroes. In addition, whenever Osborn transforms into the Green Goblin, he automatically does 3 indirect damage to players. The Green Goblin also has plenty of sneaky and opportunistic attacks. His Pumpkin Bombs and Goblin Glider provide him with extra attack strength and damage, but many of his "Goblin Gimmicks" can be disabled if heroes spend resources on them instead of on cards from their hands. You can check out some of the cards in the Green Goblin Scenario Pack in the gallery below: 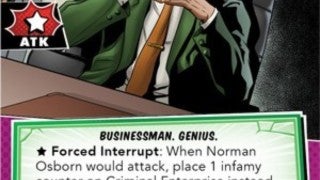 The Green Goblin Scenario Pack will be released in fourth quarter 2019. The recommended retail price is $19.99.

Disclosure: ComicBook is owned by CBS Interactive, a division of ViacomCBS.

Marvel's Avengers: Here's When You Can Play the PS4 Beta