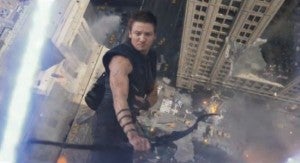 Following the release of Marvel's The Avengers, Jeremy Renner expressed discontent with his character's role in the film. "For 90 percent of the movie, I'm not the character I signed on to play," Comic Book Movie quotes Renner as saying. "It's kind of a vacancy. [He's] not even a bad guy, because there's not really a consciousness to him. To take away who that character is and just have him be this robot, essentially, and have him be this minion for evil that Loki uses ... I was limited, you know what I mean? I was a terminator in a way. Fun stunts. But is there any sort of emotional content or thought process? No." Up until now, those remarks hadn't been given a whole lot of thought, but now CBM's The Daily Superhero is reporting that Hawkeye is not slated to appear in any of the Marvel Cinematic Universe's Phase II films, with the possible exception of the as-yet-untitled Avengers sequel--and that by the time he shows up on the big screen again, the character might be completely recast. "The source hints that there's the tiniest chance Renner will reprise his role in The Avengers Sequel but the source also said there is a greater chance Hawkeye will be recast (like War Machine and the Hulk have been recast before). Finally, the source said if Hawkeye is to be recast there is a solid chance he could be incorporated into the new television show Agents of S.H.I.E.L.D. as a primary character," the report states. Ironically, the changes come at a time when Hawkeye--a character who often has some trouble gaining a foothold in the comics--has the most critically-acclaimed title at Marvel, netting a number of Eisner nominations this year.

Report: Marvel Phase 2 Won't Include Hawkeye, Renner May Be Recast